Angie Thomas Box Set: The Hate U Give and Concrete Rose (Paperback) 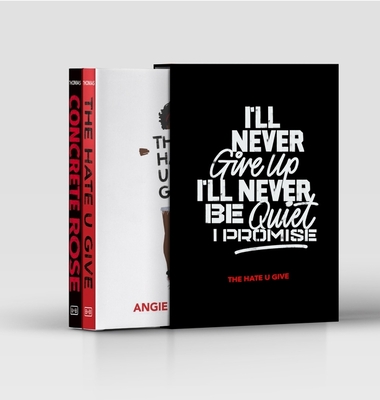 Angie Thomas Box Set: The Hate U Give and Concrete Rose (Paperback)

This paperback box set of Angie Thomas's #1 New York Times bestsellers The Hate U Give and Concrete Rose makes a great holiday or graduation gift.

Two generations of the Carter family coming of age in the world of Garden Heights and defying expectations to forge their own paths.

The Hate U Give

I'll never give up. I'll never be quiet. I promise.

Sixteen-year-old Starr Carter moves between two worlds: the poor neighborhood where she lives and the fancy suburban prep school she attends. The uneasy balance between these worlds is shattered when Starr witnesses the fatal shooting of her childhood best friend Khalil at the hands of a police officer.

This paperback edition includes a foreword from actor Amandla Stenberg and an antiracism guide.

Beauty can come from much of nothing.

Angie Thomas revisits Garden Heights seventeen years before the events of The Hate U Give in this searing and poignant exploration of Black boyhood and manhood.

If there’s one thing seventeen-year-old Maverick Carter knows, it’s that a real man takes care of his family. As the son of a former gang legend, Mav does that the only way he knows how: dealing for the King Lords. With this money he can help his mom, who works two jobs while his dad’s in prison.

4 starred reviews * “A heartfelt exploration of Black manhood and the power of possibility.” (People magazine)

Angie Thomas is the author of the award-winning, #1 New York Times bestselling novels The Hate U Give, On the Come Up, and Concrete Rose, as well as Find Your Voice: A Guided Journal for Writing Your Truth. A former teen rapper who holds a BFA in creative writing, Angie was born, raised, and still resides in Mississippi. You can find her online at www.angiethomas.com.