The Good Wife of Bath: A Novel (Paperback) 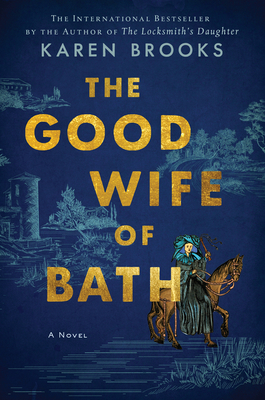 The Good Wife of Bath: A Novel (Paperback)

A provocative, immersive medieval novel starring one of literature’s most unforgettable characters in her own words—Chaucer’s bold and libidinous Wife of Bath.

“So damned readable and fun…This is the story of a woman fighting for her rights; it breaches the walls of history.”--The Australian

In the middle ages, a famous poet told a story that mocked a strong woman. It became a literary classic. But what if the woman in question had a chance to tell her own version?

England, 1364: When married off at aged twelve to an elderly farmer, brazen redheaded Eleanor quickly realizes it won’t matter what she says or does, God is not on her side—or any poor woman’s for that matter. But then again, Eleanor was born under the joint signs of Venus and Mars, making her both a lover and a fighter.

Aided by a head for business (and a surprisingly kind husband), Eleanor manages to turn her first marriage into success, and she rises through society from a cast-off farm girl to a woman of fortune who becomes a trusted friend of the social-climbing poet Geoffrey Chaucer. But more marriages follow—some happy, some not—several pilgrimages, many lovers, murder, mayhem, and many turns of fortune’s wheel as Eleanor pursues the one thing that all women want: control of their own lives.

Australian-born Karen Brooks is the author of nine novels, an academic, a newspaper columnist and social comentator, and has appeared regularly on national TV and radio. Before turning to academia, she was an army officer, and dabbled in acting. She lives in Hobart, Tasmania.

"So damned readable and fun…This is the story of a woman fighting for her rights; it breaches the walls of history.” — The Australian

“In The Good Wife of Bath, the author’s diligent work sorting fact from poetry creates a fictional but believable character who lives and breathes in every word of this satisfying, page-turning novel. Karen Brooks defiantly rewrites history into herstory. Cue the chorus: kudos!”  — New York Journal of Books

“The daughter of a merchant flouts 15th-century English convention to start a brewery in Brooks’s illuminating epic....Brooks’s attention to historical detail instills the novel with authenticity by including many historical figures and events, while Anneke’s lively voice keeps a strong grip on the reader as she works to overcome social prohibitions against women in business and find happiness and contentment. Brooks’s immersive page-turner does not disappoint.”  — Publishers Weekly on The Lady Brewer of London

“Richly atmospheric, romantic, and chock-full of period details, this fast-paced tale and its many plot twists and turns are likely to keep historical fiction fans riveted.”  — Booklist on The Lady Brewer of London

“A sweeping tale brimming with historical details and figures…[this] sumptuous novel covers five eventful years that include a dreadful plague and the Great Fire of London.”  — Booklist on The Chocolate Maker’s Wife