After the Ivory Tower Falls: How College Broke the American Dream and Blew Up Our Politics—and How to Fix It (Hardcover) 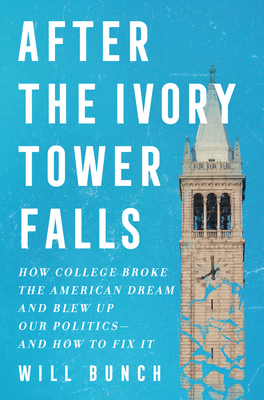 After the Ivory Tower Falls: How College Broke the American Dream and Blew Up Our Politics—and How to Fix It (Hardcover)

Today there are two Americas, separate and unequal, one educated and one not. And these two tribes—the resentful “non-college” crowd and their diploma-bearing yet increasingly disillusioned adversaries—seem on the brink of a civil war. The strongest determinant of whether a voter was likely to support Donald Trump in 2016 was whether or not they attended college, and the degree of loathing they reported feeling toward the so-called “knowledge economy of clustered, educated elites. Somewhere in the winding last half-century of the United States, the quest for a college diploma devolved from being proof of America’s commitment to learning, science, and social mobility into a kind of Hunger Games contest to the death. That quest has infuriated both the millions who got shut out and millions who got into deep debt to stay afloat.

In After the Ivory Tower Falls, award-winning journalist Will Bunch embarks on a deeply reported journey to the heart of the American Dream. That journey begins in Gambier, Ohio, home to affluent, liberal Kenyon College, a tiny speck of Democratic blue amidst the vast red swath of white, post-industrial, rural midwestern America. To understand “the college question,” there is no better entry point than Gambier, where a world-class institution caters to elite students amidst a sea of economic despair.

From there, Bunch traces the history of college in the U.S., from the landmark GI Bill through the culture wars of the 60’s and 70’s, which found their start on college campuses. We see how resentment of college-educated elites morphed into a rejection of knowledge itself—and how the explosion in student loan debt fueled major social movements like Occupy Wall Street. Bunch then takes a question we need to ask all over again—what, and who, is college even for?—and pushes it into the 21st century by proposing a new model that works for all Americans.

The sum total is a stunning work of journalism, one that lays bare the root of our political, cultural, and economic division—and charts a path forward for America.

Will Bunch is national opinion columnist for the Philadelphia Inquirer and author of several books, including Tear Down This Myth: The Right-Wing Distortion of the Reagan Legacy, The Backlash: Right-Wing Radicals, Paranoia Politics and High-Def Hucksters in the Age of Obama, and the e-book The Bern Identity: A Search for Bernie Sanders and the New American Dream. He has won numerous journalism awards and shared the 1992 Pulitzer Prize for spot news reporting with the New York Newsday staff.

“Ambitious and engrossing. … The prose is tight, direct, and often bracing. … A thoughtful, nuanced discussion of the practical and political challenges [of] trying to turn the public education system back toward public purpose.” — New York Times Book Review

“A thoughtful, and deeply unsettling, new meditation on the value of a college education. … Offers a searing indictment not only of college culture but also of the broader American culture that he argues, persuasively and frighteningly, created schisms in American life that have left huge sectors of this country unable to speak to each other, understand each other, and respect each other. … Compelling.” — Boston Globe

"Like a surgeon homing in on a cancerous tumor, Will Bunch exposes a prescription that has poisoned our public life since the 1970s: the notion that college is the only route to economic security and a good life--just as ending free tuition to public universities put that remedy out of reach for most Americans. With wisdom, grace and a gripping narrative, After the Ivory Tower Falls reveals what is so wrong in the way many of us think about higher education. A must-read for Democrats, in particular, to stop pushing snake oil to rightly suspicious voters." — Nancy MacLean, author of Democracy in Chains: The Deep History of the Radical Right's Stealth Plan for America

“[A] consistently compelling, thought-provoking book. … A must-read for anyone who cares about educational—and societal—reform.” — Kirkus Reviews (starred review)

"A comprehensive and elegantly written overview of higher education in the U.S. since World War II, this book is a must-read for anyone trying to understand how we got to our current political crisis. Bunch expertly weaves the human story of the American dream in the twentieth century with the political story of attacks on higher education to explain how a country that once prided itself on knowledge has fallen into the grip of those who proudly reject science. This book is simply terrific." — Heather Cox Richardson, author of How the South Won the Civil War

"Really interesting. ... There's a ton of terrible sh*t which is rightly exposed in this book. ... Tie[s] together this college issue with the really significant social movements that have come out of it." — Armchair Expert with Dax Shepard

“With masterful storytelling and deep reporting, Will Bunch traces the history of how American higher education evolved from a public good into a massive industry that has saddled a generation with huge debt but without the return on the investment of previous college graduates. But it’s much more than that: Bunch gives a blueprint for how we should rethink college and work for young adults. This indispensable book should be read by politicians, higher ed leaders, parents, students, and anyone else who cares about the future of our country in a rapidly changing world.” — JEFFREY SELINGO, New York Times bestselling author of Who Gets In and Why and There Is Life After College

"A wrenching analysis of a nation fractured along stark educational lines. ... Sparkles with fascinating sidenotes and insights. ... Bunch does a masterful job of explaining how college gradually became a center of contention in the culture wars. ... Striking." — Inside Higher Ed

“No other country except the United States makes people go $30,000 or $40,000, or more, into debt to get an education or certain job skills. In After the Ivory Tower Falls, Will Bunch does a masterful job explaining exactly how we got into the mess, and offers some good ideas for getting us out of it. A must-read for anyone who cares about fixing our ruptured politics and making higher education a public good once again.”  — RO KHANNA, member of Congress and author of Dignity in a Digital Age: Making Tech Work for All of Us

“A thought-provoking portrayal of the role that higher education plays in fueling the nation’s stark political divisions. … Written with the verve and historical details one expects from an expert reporter like Bunch, the book offers a well-informed… take on the 'college problem' and how to fix it.” — Forbes (The Best Higher Education Books of 2022)

"Will Bunch's book about American politics and the state of college education is both perceptive and provocative. Bunch traces the bitter divide between voters who went to college and those who didn't, and skillfully explores the consequences of college being affordable only for the select few, with so many others either shut out or forever mired in student debt. Bunch's reporting skills are on full display in After the Ivory Tower Falls, and so are his talents for seeing broad patterns and for original thinking. This is an important and necessary book." — MARGARET SULLIVAN, media columnist, Washington Post

"Punchy. ... Bunch convincingly drills into the betrayal felt by people who took on debt to pay for 'beer and circuses' at state universities but failed to land solid middle-class jobs." — Financial Times