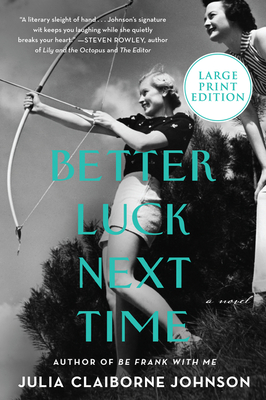 By Julia Claiborne Johnson
$30.99
Available to Order - Usually Arrives in Our Store in 4 to 7 Days

Charming and heartwarming without being saccharine or twee. A semi-comedic novel set on a Reno, NV dude ranch for soon-to-be divorcees in the 1930s. If you enjoyed George Cukor’s classic movie “The Women”, this book is for you.

This book was so much fun to read! Called a feel-good literary western, Better Luck Next Time takes you to a 1930’s divorce ranch in Reno, Nevada where an eclectic group of characters learns about life and love with heart and humor.

“Johnson’s latest novel has all the heart and soul fans of Be Frank With Me enjoyed, coupled with a retro setting at a divorce ranch in Reno during the Great Depression. Funny? Check. Heartwarming? Check. A rollicking, all-round good read? Check! Do yourself a favor and read it. Then share it with someone you love.”
— Susan Taylor, Book House of Stuyvesant Plaza, Albany, NY

“Doesn’t a romantic comedy set on a 1930s Nevada dude ranch teeming with about-to-be-divorced women owe a certain debt to the era’s big-screen classics? Then again, it’s hard to believe a cinematic version could be any more fun.” — New York Times Book Review

The dazzling second novel from the bestselling author of Be Frank with Me, a charming story of endings, new beginnings, and the complexities and complications of friendship and love, set in late 1930s Reno.

It’s 1938 and women seeking a quick, no-questions split from their husbands head to the “divorce capital of the world,” Reno, Nevada. There’s one catch: they have to wait six-weeks to become “residents.” Many of these wealthy, soon-to-be divorcees flock to the Flying Leap, a dude ranch that caters to their every need.

Twenty-four-year-old Ward spent one year at Yale before his family lost everything in the Great Depression; now he’s earning an honest living as a ranch hand at the Flying Leap. Admired for his dashing good looks—“Cary Grant in cowboy boots”—Ward thinks he’s got the Flying Leap’s clients all figured out. But two new guests are about to upend everything he thinks he knows: Nina, a St Louis heiress and amateur pilot back for her third divorce, and Emily, whose bravest moment in life was leaving her cheating husband back in San Francisco and driving herself to Reno.

A novel about divorce, marriage, and everything that comes in between (money, class, ambition, and opportunity), Better Luck Next Time is a hilarious yet poignant examination of the ways friendship can save us, love can destroy us, and the family we create can be stronger than the family we come from.

Julia Claiborne Johnson is the author of the bestselling Be Frank with Me, a finalist for the American Bookseller’s Association Best Debut Novel Award. She grew up on a farm in Tennessee before moving to New York City, where she worked at Mademoiselle and Glamour magazines. She now lives in Los Angeles with her comedy-writer husband and their two children.

"Doesn’t a romantic comedy set on a 1930s Nevada dude ranch teeming with about-to-be-divorced women owe a certain debt to the era’s big-screen classics? Then again, it’s hard to believe a cinematic version could be any more fun."
— New York Times Book Review

"Johnson’s rollicking comedy sizzles, thanks to the immensely appealing voice of its aging narrator...brims with the clever banter and farcical situations of a classic Capra film."
— Publishers Weekly (starred review)

"Do you want to read something funny?  Let’s say, a novel set at a divorce ranch in Reno in the 1930s?  A book with memorably eccentric characters, sparkling dialogue, a satisfying plot twist, and some romance and sex?  A feel-good literary comedy/western?  Here it is, then, the book you've been looking for: Julia Claiborne Johnson’s Better Luck Next Time."
— Julie Schumacher, author of  Dear Committee Members and The Shakespeare Requirement

"Rollicking, nostalgic, wistful and wise, Better Luck Next Time is another gem from Julia Claiborne Johnson. Like a modern-day Anita Loos (but with more heart), Johnson spins an irresistible yarn that captures Depression-era disappointments, hopes, and determination, and paints a touching story of how even a life gone wrong can be a life well lived."
— Karen Dukess, author of The Last Book Party

"Julia Claiborne Johnson's real skill is a literary sleight of hand: creating humorous characters with big hearts, then using them to deliver a story with a surprising emotional wallop. There were tears from heartbreak and joy! My face still hurts from smiling."
— Steven Rowley, author of Lily and the Octopus and The Editor

"Invites comparisons to Shakespeare’s madcap comedies...Like Shakespeare with his fairies, Johnson uses her own brand of magic to bring these characters to life and to remind us that love often requires a second chance."
— Chattanooga Free Press

"Channels Frank Capra’s screwball comedies...There is a delightful sense of closure in the way Johnson wraps up this shiny package, which arrives just after New Year’s like a late holiday gift."
— Christian Science Monitor

"An engrossing portrait of 1930s Reno...witty and charming."
— Booklist