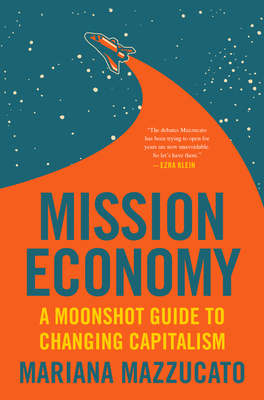 “She offers something both broad and scarce: a compelling new story about how to create a desirable future.”—New York Times

An award-winning author and leading international economist delivers a hard-hitting and much needed critique of modern capitalism in which she argues that, to solve the massive crises facing us, we must be innovative—we must use collaborative, mission-oriented thinking while also bringing a stakeholder view of public private partnerships which means not only taking risks together but also sharing the rewards.

Capitalism is in crisis. The rich have gotten richer—the 1 percent, those with more than $1 million, own 44 percent of the world's wealth—while climate change is transforming—and in some cases wiping out—life on the planet. We are plagued by crises threatening our lives, and this situation is unsustainable. But how do we fix these problems decades in the making?

Mission Economy looks at the grand challenges facing us in a radically new way. Global warming, pollution, dementia, obesity, gun violence, mobility—these environmental, health, and social dilemmas are huge, complex, and have no simple solutions. Mariana Mazzucato argues we need to think bigger and mobilize our resources in a way that is as bold as inspirational as the moon landing—this time to the most ‘wicked’ social problems of our time.. We can only begin to find answers if we fundamentally restructure capitalism to make it inclusive, sustainable, and driven by innovation that tackles concrete problems from the digital divide, to health pandemics, to our polluted cities. That means changing government tools and culture, creating new markers of corporate governance, and ensuring that corporations, society, and the government coalesce to share a common goal.

We did it to go to the moon. We can do it again to fix our problems and improve the lives of every one of us. We simply can no longer afford not to.

Mariana Mazzucato (PhD) is Professor in the Economics of Innovation and Public Value at University College London (UCL), where she is Founding Director of the Institute for Innovation & Public Purpose (IIPP). She is the winner of international prizes including the 2018 Leontief Prize for Advancing the Frontiers of Economic Thought and the 2020 John von Neumann Award. Her award winning books include The Entrepreneurial State: Debunking Public vs. Private Sector Myths (2013) and The Value of Everything: Making and Taking in the Global Economy (2018). She advises global policy makers and is Chair of the World Health Organization’s Council on the Economics of Health for All and a member of the UN’s High-level Advisory Board (HLAB) on Economic and Social Affairs.

"Mazzucato wants liberals to talk less about the redistribution of wealth and more about its creation. Politicians around the world are listening." — New York Times

"Stimulating . . . [Mazzucato] unearths a plethora of intriguing case studies to back up her claims. Policy makers will want to take note." — Publishers Weekly

"One of the world’s most influential economists is on a mission to save  capitalism from itself." — Quartz

"The debates Mazzucato has been trying to open for years are now unavoidable. So let’s have them." — Ezra Klein

"I believe [her vision] can help to think about the future."
— Pope Francis, from an open letter to Judge Roberto Andrés Gallardo, president of the Pan-American Committee of Men and Women Judges for Social Rights

"Mazzucato has influenced the way American politicians speak about the state’s potential as an economic engine." — New York Times

"The world’s scariest economist. . . . Mariana Mazzucato is a name to strike fear in the heart of anyone slightly shaky in their masculinity or grasp of the figures." — Times (UK)

"She is as forthright in her opinions as she is eloquent in expressing them." — Financial Times

"Mariana Mazzucato is foremost among the flamethrowers. A professor at University College London and the founding director of the UCL Institute for Innovation and Public Purpose, she asks fundamental questions about how 'value' has been defined, who decides what that means, and who gets to measure it." — Forbes

"One of the three most important thinkers about innovation." — New Republic

"This economist has a plan to fix capitalism. It’s time we all listened." — Wired

“She offers something both broad and scarce: a compelling new story about how to create a desirable future.” — New York Times