Protocol: The Power of Diplomacy and How to Make it Work for you. (Paperback) 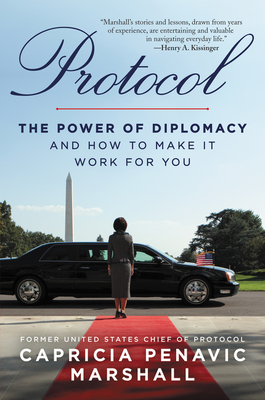 Protocol: The Power of Diplomacy and How to Make it Work for you. (Paperback)

History often appears to consist of big gestures and dramatic shifts. But for every peace treaty signed, someone set the stage, using hidden influence to effect the outcome. In her roles as chief of protocol for President Barack Obama and social secretary to President Bill Clinton and First Lady Hillary Clinton, Capricia Penavic Marshall not only bore witness to history, she facilitated it. From arranging a room to have an intended impact on the participants to knowing which cultural gestures earned trust, her behind-the scenes preparations laid the groundwork for successful diplomacy between heads of state around the world and tilted the playing field in her team's favor.

If there's one thing that working at the highest levels of government for over two decades has taught Marshall, it's that there is power in detail and nuance—the micro-moves that affect the macro-shifts. When seemingly minor aspects of an engagement go missing or awry—a botched greeting or even a poorly chosen menu—it alters the emotions and tenor of an exchange, setting up obstacles rather than paving a way forward. In some cases, an oversight may put the entire endeavor in jeopardy.

Sharing unvarnished anecdotes from her time in office—harrowing near misses, exhilarating triumphs, heartwarming personal stories—Marshall  brings us a master class in soft power, unveiling the complexity of human interactions and making the case that etiquette, cultural IQ, and a flexible mind-set matter now more than ever. When the notion of basic civility seems to be endangered, Protocol reminds us how critical these principles are while providing an accessible guide for anyone who wants to be empowered by the tools of diplomacy in work and everyday life.

Capricia Penavic Marshall was Chief of Protocol of the United States from 2009 to 2013. She is current president of Global Engagement Strategies, which advises international public and private clients on issues relating to the nexus of business and cultural diplomacy. She serves as Ambassador-in-Residence at the Adrienne Arsht Latin America Center at the Atlantic Council in Washington. In her post under the Obama administration, she reinvented modern protocol by building relationships between industry leaders worldwide creating strategies to transform global engagement. During her service she oversaw the details of diplomacy during six State and Official Visits, countless Working Visits, and the G20, Nuclear Security, APEC, G8, NATO and Sunnylands Summits.

“Makes the case that ‘soft power’ is too often underestimated both in foreign relations and in life.” — The Santa Monica Daily Press

“For over two decades, Capricia has been my friend and colleague, from Arkansas to Zambia. She is a problem solver and a bridge builder, and I’ve been so lucky to have her by my side through the years. Protocol is a must-read, taking us behind the curtain of the highest levels of diplomacy, teaching us lessons about the intersection of governing and humanity that we need now more than ever.” — Hillary Clinton

“An interesting and well-written account of the role of protocol in modern diplomacy. Marshall’s stories and lessons, drawn from years of experience, are entertaining and valuable in navigating everyday life.” — Henry A. Kissinger

“Protocol—the rules that govern professional, government, and social interactions—may be the very reset we need. These practices aren’t dependent on your wallet size or where you come from, your skin color or your nationality, rather protocol is something we all can get behind, . . . My thanks to Ambassador Capricia Penavic Marshall for this book—give it to everyone you meet for birthdays, weddings, and elections. It can only help.” — Whoopi Goldberg

“Working with Capricia during the Obama administration was nothing short of wonderful! Her guiding hand and innovative methods laid the foundation for our successful diplomacy on the world stage. Through amusing and touching anecdotes, many of which we shared together, Capricia details the superpower of protocol, a power that helped foster an environment conducive to many of President Obama’s successes.” — Valerie Jarrett, former senior advisor to Barack Obama and author of Finding My Voice

“Capricia Penavic Marshall was an extraordinary chief of protocol, and she has now written an extraordinary book on how international protocol actually works and how it can work for every business and person. I cannot recommend this book too highly.” — David Rubenstein, cofounder and co-executive chairman of the Carlyle Group and author of The American Story

“Capricia is the ultimate master in the art of protocol. As a first-generation American woman, she brilliantly manages the cultural nuances of consequential public- and private-sector engagements. Reading her book, I have learned a lot, I have laughed a lot, I have enjoyed every page.” — Christine Lagarde, president of the European Central Bank