My Invented Country: A Memoir (Paperback) 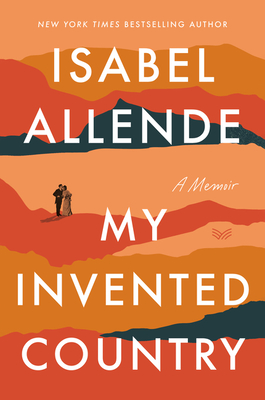 My Invented Country: A Memoir (Paperback)

“A stunningly intimate memoir. . . . Allende is that rare writer whose understanding of story matches her mastery of language.”—Entertainment Weekly

The revered New York Times bestselling author of House of the Spirits and A Long Petal of the Sea ponders the elements that led to her becoming a writer, including the homeland she lost and the one she found, and the family spirits, both living and dead, who haunt her life and work.

In this wondrous and intimate book, Isabel Allende explores the role of memory and nostalgia in shaping her life, her books, and that most intimate connection to her place of origin. My Invented Country brings her homeland of Chile to life in her unique voice, evoking the magnificent landscapes of her land, the almost mythic people of her family; the tragedy and hope of her people; and the politics, religion, and magic that infuse them all.

My Invented Country orbits two life-changing moments: the 1973 assassination of her uncle Salvador Allende Gossens which sent her into exile and inspired her literary career; and the terrorist attacks of September 11, 2001, on her adopted homeland, the United States. Ping-ponging across distance and time, between past and present lives, it is a monumental tribute to history and the immigrant experience and a wise and personal consideration of what it means to pursue a reflective life in a cacophonous, contradictory world.

Isabel Allende is the author of twelve works of fiction, including the New York Times bestsellers Maya’s Notebook, Island Beneath the Sea, Inés of My Soul, Daughter of Fortune, and a novel that has become a world-renowned classic, The House of the Spirits. Born in Peru and raised in Chile, she lives in California.

“Isabel Allende [is] surely one of the most graceful and yet haunting writers alive.” — St. Louis Post-Dispatch

“At every bend [Allende] delights us with unexpected humor.” — Milwaukee Journal Sentinel

“Dazzling as a kaleidoscope: an artful tumbling and knocking that throws light and reveals strange depths.” — Kirkus Reviews

“Riveting in its frankness and compassion, … [Allende’s] account of why and how she became a writer is profoundly moving.” — Booklist

“A stunningly intimate memoir …. Allende is that rare writer whose understanding of story matches her mastery of language.” — Entertainment Weekly