How to Destroy America in Three Easy Steps (Hardcover) 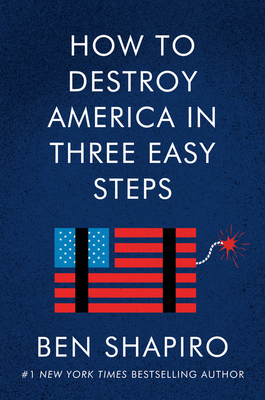 How to Destroy America in Three Easy Steps (Hardcover)

A growing number of Americans want to tear down what it’s taken us 250 years to build—and they’ll start by canceling our shared history, ideals, and culture.

Traditional areas of civic agreement are vanishing. We can’t agree on what makes America special. We can’t even agree that America is special. We’re coming to the point that we can’t even agree what the word America itself means. “Disintegrationists” say we’re stronger together, but their assault on America’s history, philosophy, and culture will only tear us apart.

Who are the disintegrationists? From Howard Zinn’s A People’s History of the United States to the New York Times’ 1619 project, many modern analyses view American history through the lens of competing oppressions, a racist and corrupt experiment from the very beginning. They see American philosophy as a lie – beautiful words pasted over a thoroughly rotted system. They see America’s culture of rights as a façade that merely reinforces traditional hierarchies of power, instead of being the only culture that guarantees freedom for individuals.

Disintegrationist attacks on the values that built our nation are insidious because they replace each foundational belief, from the rights to free speech and self-defense to the importance of marriage and faith communities, with nothing more than an increased reliance on the government.

This twisted disintegrationist vision replaces the traditional “unionist” understanding that all Americans are united in a shared striving toward the perfection of universal ideals.

How to Destroy America in Three Easy Steps shows that to be a cohesive nation we have to uphold foundational truths about ourselves, our history, and reality itself—to be unionists instead of disintegrationists. Shapiro offers a vital warning that if we don’t recover these shared truths, our future—our union—as a great country is threatened with destruction.

Ben Shapiro is founding editor-in-chief and editor emeritus of The Daily Wire and host of "The Ben Shapiro Show," the top conservative podcast in the nation. A New York Times bestselling author, Shapiro is a graduate of Harvard Law School, and an Orthodox Jew. His work has been profiled in nearly every major American publication, and he has appeared as the featured speaker at many conservative events on campuses nationwide, several of those appearances targeted by progressive and “Antifa” activists.

“Ben Shapiro combines a sophisticated intellect and wide erudition with the skills of a really gifted mud wrestler. You’ll find all of him in this book: the deep seriousness, the ardor in combat, the sly wordplay, and the love of country—above all, the love of country. How to Destroy America in Three Easy Steps is Ben Shapiro at his best. Which is to say: glorious.” — Peter Robinson, Murdoch Distinguished Policy Fellow at the Hoover Institution and former speechwriter and special assistant to President Ronald Reagan

"Most Americans still embrace our free-enterprise system—today. But will they in the future? Ben Shapiro shows that it depends on the commitments we make to our common philosophy, culture, and history. Read this book and you will be prepared to defend, confidently and joyfully, the system that changed the world for the better." — Arthur Brooks, Professor of the Practice of Public Leadership, Harvard Kennedy School, and author of Love Your Enemies

"Facing much more trying times than our own, Abraham Lincoln insisted, ‘We are not enemies, but friends. We must not be enemies.’ Ben Shapiro reminds us that this friendship has a foundation, that it is the American idea, and that we still are responsible as citizens for the work of building that more perfect union." — Kevin Willliamson, author of The Smallest Majority

"Conservatism is grounded in gratitude—gratitude for what we love and want to conserve for future generations. Ben Shapiro’s How to Destroy America in Three Easy Steps is a valuable and passionate expression of gratitude for what makes this country great and why we should be grateful for what it is, not angry at it for falling short of some ideological fantasy of perfection." — Jonah Goldberg, author of Suicide of the West