Indestructible: The Unforgettable Memoir of a Marine Hero at the Battle of Iwo Jima (Large Print / Paperback) 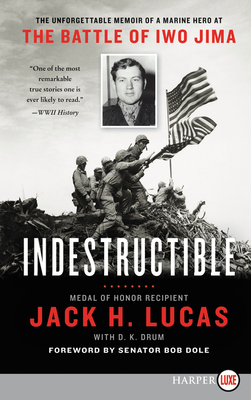 Indestructible: The Unforgettable Memoir of a Marine Hero at the Battle of Iwo Jima (Large Print / Paperback)

Medal of Honor recipient Jack H. Lucas’s classic memoir of his heroics at the Battle of Iwo Jima—with a foreword by Bob Dole and reissued to coincide with the 75th anniversary of the battle in 2020.

On February 20, 1945, the second day of the assault on Iwo Jima—one of the bloodiest battles of the Pacific theater in World War II—Private Jack Lucas, who was only seventeen, and three other Marines engaged in a close-proximity firefight with Japanese soldiers. When two enemy grenades landed in their trench, Lucas jumped on one and pulled the other under his body to save the lives of his comrades. Lucas was blown into the air as his body was torn apart by 250 entrance wounds. He was so severely wounded that his team left him for dead. Miraculously, he survived.

While on the hospital ship Samaritan, his spirit soared to see the American flag flying atop Mount Suribachi—the same flag immortalized in Joe Rosenthal’s iconic photograph, Raising the Flag on Iwo Jima. Lucas endured twenty-one grueling surgeries and carried 200 pieces of shrapnel in his body for the rest of his life. Awarded the Medal of Honor, he became the youngest Marine in U.S. history—and the youngest of all World War II servicemen—to receive the honor.

Indestructible tells the remarkable story of an extraordinary American possessed with a fierce determination to serve his country.

JACKLYN "JACK" HAROLD LUCAS enlisted in the United States Marine Corps on August 6, 1942, at the age of fourteen. He was assigned to the 1st Battalion, 26th Marine Regiment, 5th Marine Division during the Battle of Iwo Jima. He received the Medal of Honor from President Harry S. Truman on October 5, 1945. After graduating from college, he enlisted in the United States Army in 1961 and served four years in the 82nd Airborne Division. He was married to Ruby Lucas and they lived in Hattiesburg, Mississippi. He passed away in 2008 at the age of 80.

Inspired by parents who were part of the "greatest generation" and a brother who received the Bronze Star in Vietnam and later succumbed to his wartime injury, D.K. DRUM collaborated with Jack Lucas to write Indestructible. She is married to thrice-decorated Vietnam veteran Tommy Drum. The price paid for freedom is an important lesson that has been forwarded on to their progeny: Jon, Laura, Isabel, Juliana, and Willa. May the torch burn brightly as it is passed to all future generations.

“Jack Lucas exemplified with his own blood and grit the spirit of sacrifice that won the war in the Pacific. All Americans should know his story; our foes should contemplate it.”
— Bob Dole

“Jack Lucas’s story is beyond compare. ... Spendidly written.”
— Leatherneck (The Magazine of the Marines)

“One of the most remarkable true stories one is ever likely to read.”
— WWII History

“Worth reading … The story of his recovery from his wounds and postwar life, including celebrity tours with his Medal of Honor, are told with painstaking detail, and are as fascinating as his heroic actions on Iwo Jima.”
— Wall Street Journal