Crab and Snail: The Tidal Pool of Cool (Paperback) 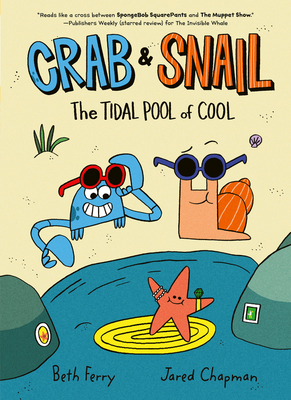 Crab and Snail: The Tidal Pool of Cool (Paperback)

This is book number 2 in the Crab and Snail series.

Crab and Snail set out on a mission to be cooler than cool in their second unforgettable seaside adventure in the graphic early reader series by New York Times bestselling author Beth Ferry and beloved illustrator Jared Chapman.

Starfish is pointy-perfect, so wow to the wow! And her tidal pool is filled with friends and fun things. But Crab and Snail weren’t invited. While the best beach friends do everything they can to catch Starfish’s attention and score an invite, they begin to realize that being kind just might be the coolest of cool.

Crab and Snail are everyone’s new favorite characters in the graphic early reader space. Fans of Narwhal & Jelly and Beak & Ally will love these quirky characters and clever stories.

"A character-based volume that reads like a cross between SpongeBob SquarePants and The Muppet Show."—Publishers Weekly (starred review) for The Invisible Whale (Book One)

Beth Ferry is the New York Times bestselling author of numerous picture books, including Stick and Stone, The Scarecrow, and The Nice Dream Truck. She lives with her family by the beach in New Jersey, where she finds inspiration in the salty air. In addition to writing picture books, Beth also writes graphic novels for emerging readers.

Jared Chapman is the author-illustrator of the popular books Vegetables in Underwear and Fruits in Suits. Other books he has written and illustrated include Steve, Raised by Wolves and Pirate, Viking & Scientist. He is the illustrator of Wordplay and several other picture books. Jared was born in Louisiana, grew up in Texas, went to college in Georgia, and now calls the piney woods of northeast Texas his home. Visit him at www.jaredchapman.com.

Ferry has a knack for concealing thought-provoking concepts in deceptively simple stories, and this newest offering definitely continues that trend. A surefire hit. — Kirkus Reviews