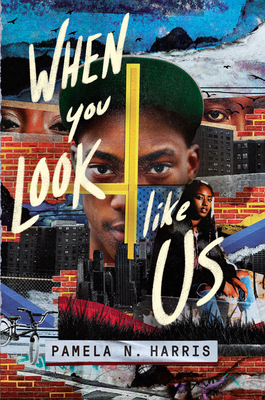 “A high-speed story that will draw teens in and keep them turning pages until they reach the unpredictable and thrilling ending. A must for YA collections.” (School Library Journal)

A 2022 NAACP Image Award for Outstanding Literary Work nominee and a 2022 Edgar Award nominee, this timely, gripping teen novel is about a boy who must take up the search for his sister when she goes missing from a neighborhood where Black girls’ disappearances are too often overlooked, from debut author Pamela Harris. Perfect for fans of Jason Reynolds and Tiffany D. Jackson.

When you look like us—brown skin, brown eyes, black braids or fades—everyone else thinks you’re trouble. No one even blinks twice over a missing Black girl from public housing because she must’ve brought whatever happened to her upon herself. I, Jay Murphy, can admit that, for a minute, I thought my sister Nicole just got caught up with her boyfriend—a drug dealer—and his friends. But she’s been gone too long. Nic, where are you?

If I hadn’t hung up on her that night, she would be at our house, spending time with Grandma.

If I was a better brother, she’d be finishing senior year instead of being another name on a missing persons list.

It’s time to step up, to do what the Newport News police department won’t.

Pamela N. Harris was born and somewhat raised in Newport News, Virginia—also affectionately known as “Bad News.” A former school counselor by day, she received her BA in English and her master’s in school counseling at Old Dominion University, her MFA in creative writing at Fairleigh Dickinson University, and a PhD in counselor education and supervision at The College of William & Mary. When she isn’t writing, Pam is rewatching Leonardo DiCaprio movies, chasing after her two kiddos, and pretending to enjoy exercising. When You Look Like Us is her debut novel. She lives in Williamsburg, Virginia.

“A high-speed story that will draw teens in and keep them turning pages until they reach the unpredictable and thrilling ending. A must for YA collections.” — School Library Journal (starred review)

“A powerful story about misperceptions, reality, and the lives lived in between.” — Kirkus Reviews (starred review)

“[A] poignant debut novel. Harris creates a vividly drawn world, a rich cast of characters, and an authentic neighborhood.” — Booklist

“The book wisely distinguishes preconceptions from prejudice, making clear that the aggressions, microaggressions, and general oppression by white society is a whole lot different than a teenaged kid making a judgment call on his sister’s boyfriend…There’s emotional catharsis in Jay’s finally accepting that he does not have to be perfect to be human.” — Bulletin of the Center for Children’s Books

"Harris unapologetically gives voice to the grief that a community can feel when the law fails them, as well as their need to, instead, rely on the hope, love, and power they bring to one another. The strength and endurance of the Black family reverberate throughout this achingly honest debut." — Publishers Weekly