No, You Shut Up: Speaking Truth to Power and Reclaiming America (Paperback) 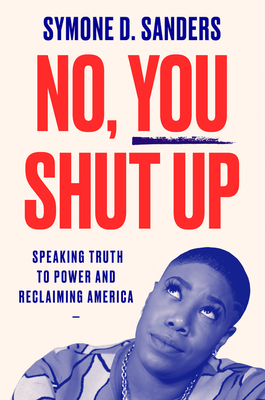 No, You Shut Up: Speaking Truth to Power and Reclaiming America (Paperback)


On Our Shelves Now
“Symone’s honest and profound reflection on standing up and speaking out is sure to inspire young people across the country to become the change agents the world needs.” — Congresswoman Maxine Waters

In this rousing call to leadership, the self-described millennial spokesperson for the culture, CNN’s designated "woke AF" former commentator, and the youngest national press secretary in the history of the United States shares her take-no-prisoners approach to life, politics, and career success, and shows a new generation how to be loud and powerful in their own right.

Many people—most notably white older men—may try to stop Symone Sanders from speaking up and out. But Symone will NOT shut up. And neither should you. In this inspiring call-to-action, Symone tells stories from her own life of not-shutting-up alongside loud young revolutionaries who came before her to help you find your authentic voice and use it to your advantage; to fight ideological battles more effectively; and to resist those who try to silence you.

We are all gurus, masterminds, artists, entrepreneurs—we are the change agents we have been waiting for. IT IS US. And the time is RIGHT NOW. I know you’re wondering, “But HOW?” And we don’t have all the answers! Symone is the first to admit we’re all winging it in one way or another. But the point is we’re out there doing it. So get started. Open your mouth and start talking. Loudly.

No You Shut Up goes beyond the surplus of “Vote-Or-Die” books we’ve seen before. Because change doesn’t just happen at the ballot box. We need people fighting oppression, injustice, and inequality—in the workplace, on the cultural battlefield, in government, in every corner of the world. With spirited storytelling filtered through a voice that cannot and will not be ignored, Symone inspires you to start now. You don’t need to have all the answers, or wait your turn to help create the change you want to see. All you need is a new toolbox, an unshakable commitment, and the confidence and guidance to wield those tools effectively.

Symone Sanders is a senior advisor for former Vice President Joe Biden's 2020 presidential campaign. A juvenile justice advocate, she formerly served as chair of the Coalition of Juvenile Justice Emerging Leaders Committee and as a member of the Federal Advisory Committee on Juvenile Justice.  She is a former CNN political commentator and been a resident fellow at both Harvard University's Institute of Politics at the Kennedy School and the University of Southern California's Center for the Political Future. She lives in Washington, DC.

“Symone’s honest and profound reflection on standing up and speaking out is sure to inspire young people across the country to become the change agents the world needs.”  — Congresswoman Maxine Waters

“Full of spirit, wisdom, and unapologetic truth-telling, No, You Shut Up should be required reading for young activists of all stripes.”  — Beverly Bond, founder of Black Girls Rock!

"The powerful message of her book can be encapsulated by these three sentences: ‘No one is going to hand you power or open the door for you to voice your opinion or your desires. You have to demand it. And part of the way you do that is saying out loud, to anyone who will listen, what it is that you want, and then backing those words up with actions.’ Provocative, galvanizing words that should inspire others to take action against the status quo.” — Kirkus Reviews