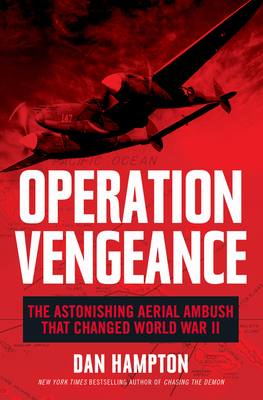 In 1943, the United States military began to plan one of the most dramatic secret missions of World War II. Its code name was Operation Vengeance. Naval Intelligence had intercepted the itinerary of Admiral Isoroku Yamamoto, the Commander-in-Chief of the Japanese Combined Fleet, whose stealth attack on Pearl Harbor precipitated America’s entry into the war. Harvard-educated, Yamamoto was a close confidant of Emperor Hirohito and a brilliant tactician who epitomized Japanese military might. On April 18th, the U.S. discovered, he would travel to Rabaul in the South Pacific to visit Japanese troops, then fly to the Japanese airfield at Balalale, 400 miles to the southeast.

Set into motion, the Americans’ plan was one of the most tactically difficult operations of the war. To avoid detection, U.S. pilots had to embark on a circuitous, 1,000-mile odyssey that would test not only their skills but the physical integrity of their planes. The timing was also crucial: the slightest miscalculation, even by a few minutes—or a delay on the famously punctual Yamamoto’s end—meant the entire plan would collapse, endangering American lives. But if these remarkable pilots succeeded, they could help turn the tide of the war—and greatly boost Allied morale.

Informed by deep archival research and his experience as a decorated combat pilot, Operation Vengeance focuses on the mission’s pilots and recreates the moment-by-moment drama they experienced in the air. Hampton recreates this epic event in thrilling detail, and provides groundbreaking evidence about what really happened that day.

Lieutenant Colonel (Ret.) Dan Hampton flew 151 combat missions during his twenty years (1986–2006) in the United States Air Force. For his service in the Iraq War, Kosovo conflict, and first Gulf War, Col. Hampton received four Distinguished Flying Crosses with Valor, a Purple Heart, eight Air Medals with Valor, five Meritorious Service medals, and numerous other citations. He is a graduate of the USAF Fighter Weapons School, USN Top Gun School (TOGS), and USAF Special Operations School. A frequent guest analyst on CNN, Fox News, and MSNBC discussing foreign affairs, military, aviation, and intelligence issues, he has published in Aviation History, the Journal of Electronic Defense, Air Force Magazine, Vietnam magazine, and Airpower magazine, and written several classified tactical works for the USAF Weapons Review. He is the author of the national bestsellers Viper Pilot and Lords of the Sky, as well as a novel, The Mercenary.

“For seventy-seven years ‘Operation Vengeance’ has fascinated military historians.  At least three previous books have addressed the subject since the 1960s but not until now has the story been told in such detail.  Dan Hampton combines an intimate knowledge of military aviation with an eye for detail that removes any lingering doubt: the admiral who planned the Pearl Harbor attack was downed by an Oregon farm boy named Rex Barber.”
— BARRETT TILLMAN, author of Whirlwind

"A brilliant read. ... Riveting. ... Hampton’s story and the amazing details he offers puts the reader right inside of the cockpit of the P-38. ... An electrifying page-turner."
— SOFREP

“Dan Hampton's vivid writing transported me from an Oregon farm, where a young boy dreamed of becoming a fighter ace, to a top-secret kill mission and an epic moment of American justice exacted high over the South Pacific. Sweeping across much of the Pacific war along the way, Operation Vengeance is colorful, intimate, eye-popping history delivered at a breakneck pace. I loved it.”
— LYNN VINCENT, New York Times Bestselling Coauthor of Indianapolis

"Operation Vengeance is a whacking great read every bit as exciting as the real mission.”

"The accessible storytelling by Hampton will likely be of interest for aficionados of the period."
— Library Journal