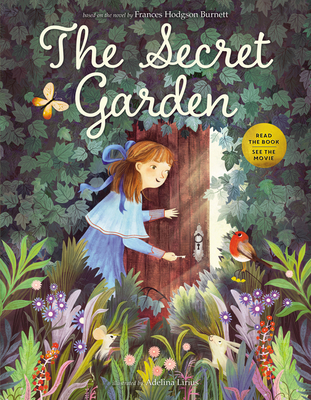 Based on the beloved classic children’s novel by Frances Hodgson Burnett, this edition of The Secret Garden is a beautifully illustrated hardcover picture book adaptation that all children will treasure.

Once upon a time…a walled garden bloomed under the summer skies in the north of England. But it was locked up and left all alone. And it stayed all alone, for many years. Until…

When young Mary Lennox moves into Misselthwaite Manor, she hates it. She hates the cold hallways and ugly moor. And she hates how lonely she is. The only comfort Mary has is exploring the manor’s grounds.

After uncovering a hidden key, Mary discovers an old, abandoned garden that has a few secrets. With two unexpected friends, Mary gets to work bringing the garden back to life. In Mary’s determination to see the garden bloom, she undergoes a powerful transformation of her own.

Frances Hodgson Burnett (1849–1924) grew up in England, but she began writing what was to become The Secret Garden in 1909, when she was creating a garden for a new home in Long Island, New York. Frances was a born storyteller. Even as a young child, her greatest pleasure was making up stories and acting them out, using her dolls as characters. She wrote over forty books in her lifetime.

Adelina Lirius is an illustrator and designer living in Stockholm, Sweden. Drawing makes her happy, and fortunately she gets to draw every day. Besides drawing, she likes to create miniature things out of paper and clay, visit the cinema, and bake cookies; and she loves animals, especially dogs.