My Vanishing Country: A Memoir (Paperback) 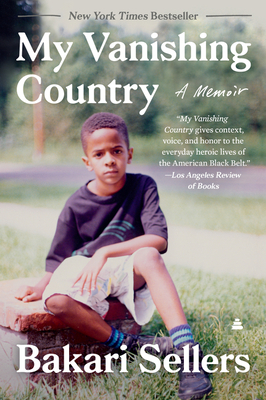 My Vanishing Country: A Memoir (Paperback)

What J. D. Vance did for Appalachia with Hillbilly Elegy, CNN analyst  and one of the youngest state representatives in South Carolina history Bakari Sellers does for the rural South, in this important book that illuminates the lives of America’s forgotten black working-class men and women.

Part memoir, part historical and cultural analysis, My Vanishing Country is an eye-opening journey through the South's past, present, and future.

Anchored in in Bakari Seller’s hometown of Denmark, South Carolina, Country illuminates the pride and pain that continues to fertilize the soil of one of the poorest states in the nation. He traces his father’s rise to become, friend of Stokely Carmichael and Martin Luther King, a civil rights hero, and member of the Student Non-Violent Coordinating Committee (SNCC) , to explore the plight of the South's dwindling rural, black working class—many of whom can trace their ancestry back for seven generations.

In his poetic personal history, we are awakened to the crisis affecting the other “Forgotten Men & Women,” who the media seldom acknowledges. For Sellers, these are his family members, neighbors, and friends. He humanizes the struggles that shape their lives: to gain access to healthcare as rural hospitals disappear; to make ends meet as the factories they have relied on shut down and move overseas; to hold on to precious traditions as their towns erode; to forge a path forward without succumbing to despair.

My Vanishing Country is also a love letter to fatherhood—to Sellers' father, his lodestar, whose life lessons have shaped him, and to his newborn twins, who he hopes will embrace the Sellers family name and honor its legacy.

Bakari Sellers made history in 2006 when, at just twenty-two years old, he defeated a twenty-six-year incumbent State Representative to become the youngest member of the South Carolina state legislature and the youngest African American elected official in the nation. In 2014 he was the Democratic Nominee for Lieutenant Governor in the state of South Carolina. Sellers is a CNN political analyst and served in the South Carolina state legislature. Recently named to ’s 󈬘 Under 40” list, he is also a practicing attorney who fights to give a voice to the voiceless.

“Bakari Sellers’ My Vanishing Country is exactly the book we need right now. The issues he raises are deeply personal and important to me. In his captivating memoir, Sellers not only brings a personal touch to the resilient people in places like his hometown Denmark, South Carolina, but he also rings the alarm about dangerous policies being enacted across the state and the devastating impact that they are having on people’s everyday lives.” — Hillary Rodham Clinton, the first woman in U.S. history to become the presidential nominee of a major political party.

"My Vanishing Country is both a timely and timeless book that sheds a light on the unseen and gives a voice to the many who are unheard." — Tyler Perry

“My Vanishing Country solidifies Bakari Sellers as a major voice for his generation. He has taken the torch from his father Cleveland Sellers and soared. His brutally honest look at the systemic racism that continues to hold back the black working class is revelatory. His ownership of being Black, Country, and Proud is refreshing.” — Angela Rye, CNN Commentator and CEO of IMPACT Strategies

“A strong voice for social justice emerges in an engaging memoir.” — Kirkus Reviews

“Family trauma—even inherited trauma—can take a tremendous toll on children. But as Bakari Sellers makes plain in My Vanishing Country, family trauma can also be a source of strength.” — BookPage