Julie (Julie of the Wolves #2) (Paperback) 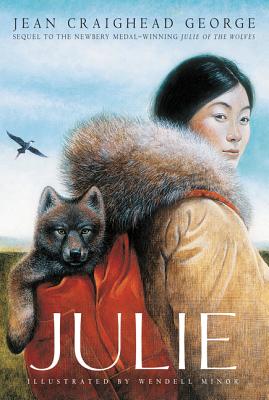 Julie (Julie of the Wolves #2) (Paperback)

The acclaimed sequel to the beloved Newbery Medal-winning Julie of the Wolves, this classic middle grade novel is an excellent choice for tween readers.

Julie's decision to return home to her people is not an easy one. But after many months in the wilderness, living in harmony with the wolves that saved her life, she knows the time has come.

But Julie is not prepared for all the changes that she finds. Her father has forsaken many of the old Inuit traditions. He has given up his sled dogs for a snowmobile, and now looks after the musk oxen that serve as the village's income. He will do anything to protect them—even shoot any wolves that might threaten the herd.

Julie knows that, like her father, she must find a way to reconcile the old ways with the new. But how can she do that without putting her beloved wolves in danger?

Don't miss any of the books in Jean Craighead George's groundbreaking series: Julie of the Wolves, Julie, and Julie's Wolf Pack.

Jean Craighead George wrote over one hundred books for children and young adults. Her novel Julie of the Wolves won the Newbery Medal in 1973, and she received a 1960 Newbery Honor for My Side of the Mountain. Born into a family of famous naturalists, Jean spent her entire career writing books that celebrated the natural world.

Wendell Minor is nationally known for the artwork he has created for over sixty award-winning children’s books. His many collaborators include Jean Craighead George, Robert Burleigh, Buzz Aldrin, Tony Johnston, Nikki Grimes, Mary Higgins Clark, and, last but not least, his wife, Florence. He is also the author and illustrator of My Farm Friends.

“This is that rare thing, a sequel worth of its original.” — Bulletin of the Center for Children’s Books

“A strong and compelling adventure.” — The Horn Book