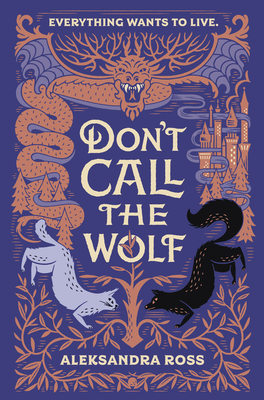 Fans of Leigh Bardugo and Holly Black will devour this gorgeously imagined fantasy about a dark forest besieged by monsters—and the wild queen who has sworn to drive them out.

A fierce young queen, neither human nor lynx, who fights to protect a forest humans have long abandoned.

An exhausted young soldier, last of his name, who searches for the brother who disappeared beneath those trees without a trace.

A Golden Dragon, fearsome and vengeful, whose wingbeats haunt their nightmares and their steps.

When these three paths cross at the fringes of a war between monsters and men, shapeshifter queen and reluctant hero strike a deal that may finally turn the tide against the rising hordes of darkness. Ren will help Lukasz find his brother…if Lukasz promises to slay the Dragon.

But promises are all too easily broken.

This Eastern European fantasy debut, inspired by the Polish fairy tale "The Glass Mountain," will take you on a twisting journey full of creeping tension, simmering romance, and haunting folklore—perfect for readers who loved An Enchantment of Ravens and The Hazel Wood.

Aleksandra Ross's earliest memories include sitting on the couch and listening to her grandmother read the Polish folktales of her childhood. She grew up in Vancouver, BC, and went to medical school at the University of Alberta. Don’t Call the Wolf is her first novel.

“Ross’ world is rich and meticulously developed. An immersive world rooted in Polish culture.” — Bulletin of the Center for Children’s Books

“High-fantasy storytelling in the style of His Dark Materials or Lord of the Rings. Truly thrilling.” — Booklist

“Immediately hooks the reader with its dark and twisted scenery. In a genre full of retellings, this book sets itself apart.” — School Library Journal