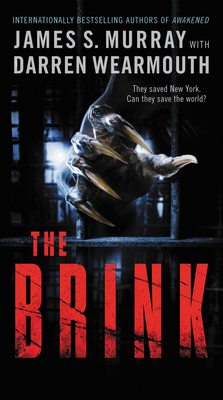 By James S. Murray, Darren Wearmouth
$9.99
Available to Order - Usually Arrives in Our Store in 4 to 7 Days

“Murray and Wearmouth’s latest THE BRINK is a white-knuckled rollercoaster. This novel is chocked full of everything I love: strange creatures, a world teetering on the edge, and heroes who I’d want at my side during any firefight. This isn’t just a story hopped on steroids—but one injected with nitrous and blazing on all cylinders. Give me more!” —James Rollins, #1 New York Times bestseller of Crucible

The sequel to the international bestseller (including #1 Sunday Times bestseller) Awakened, by one of the stars of TruTV’s Impractical Jokers and a bestselling science fiction author.

Former NYC Mayor Tom Cafferty has been haunted by the horror of a single day. The opening of the brand new Z-train subway line beneath the Hudson River—the supposed shining moment of his tenure. But the ribbon-cutting ceremony turned deadly when the train carrying Cafferty’s wife and other citizens was attacked by a horde of hyper intelligent, bloodthirsty creatures previously unknown to humanity.

Everything changed for Cafferty, ex-NYPD officer Sarah Bowcut, and tech-expert Diego Munoz that day. They had uncovered the deadly truth: the attack was no accident.

And now the creatures that wreaked havoc underneath New York have spread worldwide, and with a massive cover-up—and a secret organization holding nations hostage with the knowledge of how to kill them—Cafferty’s team must fight against impossible odds to save the entire planet from an apocalyptic scale disaster.

An explosive and thrilling international adventure, the stakes are even higher in the latest book from bestselling duo James S. Murray and Darren Wearmouth!

James S. Murray is a writer, executive producer, and actor, best known as “Murr” on the hit television show Impractical Jokers on truTV. He is also one of the stars of the TV show The Misery Index on TBS along with his comedy troupe, The Tenderloins. He has worked as the Senior Vice President of Development for NorthSouth Productions for a decade, is the owner of Impractical Productions, LLC, and is the author of the international bestselling novels Awakened and The Brink. Originally from Staten Island, he now lives in Princeton, NJ. Facebook / Twitter: @ jamessmurray Instagram: @TheRealMurr

Darren Wearmouth spent six years in the British Army before pursuing a career in corporate technology. After fifteen years working for multinational firms and a start-ups, he decided to follow his passion for writing. He is the author of numerous international bestselling novels, including Awakened, The Brink, First Activation, and Critical Dawn. He lives in Hamilton, Ontario.Twitter: @ darrenwearmouth

“Awakened goes international, and the terror skyrockets. The Brink is proof that sometimes the most horrible creatures lurk closer than you think. Powerful and horrifying. Curse you, Murray and Wearmouth, for keeping me awake so late.”
— Brad Meltzer, #1 bestselling author of The Escape Artist