If You Lived Here You’d Be Home By Now: Why We Traded the Commuting Life for a Little House on the Prairie (Hardcover) 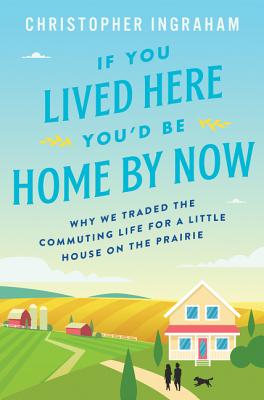 If You Lived Here You’d Be Home By Now: Why We Traded the Commuting Life for a Little House on the Prairie (Hardcover)

An NPR Best Book of the Year

The hilarious, charming, and candid story of writer Christopher Ingraham’s decision to uproot his life and move his family to Red Lake Falls, Minnesota, population 1,400—the community he made famous as “the worst place to live in America” in a story he wrote for the Washington Post.

Like so many young American couples, Chris Ingraham and his wife Briana were having a difficult time making ends meet as they tried to raise their twin boys in the East Coast suburbs.  One day, Chris – in his role as a “data guy” reporter at the Washington Post – stumbled on a study that would change his life.  It was a ranking of America’s 3,000+ counties from ugliest to most scenic. He quickly scrolled to the bottom of the list and gleefully wrote the words “The absolute worst place to live in America is (drumroll please) … Red Lake County, Minn.” The story went viral, to put it mildly.

Among the reactions were many from residents of Red Lake County.  While they were unflappably polite – it’s not called “Minnesota Nice” for nothing – they challenged him to look beyond the spreadsheet and actually visit their community. Ingraham, with slight trepidation, accepted.   Impressed by the locals’ warmth, humor and hospitality – and ever more aware of his financial situation and torturous commute – Chris and Briana eventually decided to relocate to the town he’d just dragged through the dirt on the Internet.

If You Lived Here You’d Be Home by Now is the story of making a decision that turns all your preconceptions – good and bad -- on their heads.  In Red Lake County, Ingraham experiences the intensity and power of small-town gossip, struggles to find a decent cup of coffee, suffers through winters with temperatures dropping to forty below zero, and unearths some truths about small-town life that the coastal media usually miss. It’s a wry and charming tale – with data! -- of what happened to one family brave enough to move waaaay beyond its comfort zone

Christopher Ingraham writes about all things data, with a particular interest in wealth, happiness, and inequality. He previously worked at the Brookings Institution and the Pew Research Center.

“Thank you, Christopher Ingraham for venturing out of the bubble of stereotyping and misunderstanding that often confines American urbanites who never leave the city and smugly judge rural Americans from their leather couches. I love Mr. Ingraham for his open mind and reporter’s grasp of detail and complicated truth. He captures the charm of a small town entertainingly, without sentimentality or the canned platitudes of those who drop in for a day and count themselves expert analysts after lunchtime. Good work!” — George Hodgman, NY Times bestselling author of Bettyville

“If you want to understand America’s current existential crisis – namely the rural/urban divide – please pick up Christopher Ingraham’s book. He writes with humor and compassion, but also with hard data and insight. The result is a fascinating portrait of the middle of our country, both its strengths and weaknesses. It’s like “Green Acres” with regression analysis.” — AJ Jacobs, bestselling author of The Know It All