Making Sense: Conversations on Consciousness, Morality, and the Future of Humanity (Hardcover) 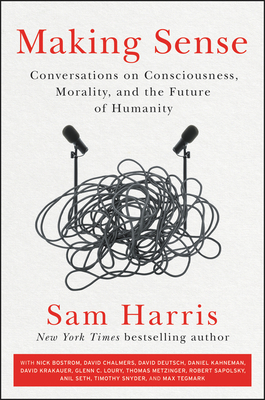 Making Sense: Conversations on Consciousness, Morality, and the Future of Humanity (Hardcover)

From the bestselling author of Waking Up and The End of Faith, an adaptation of his wildly popular, often controversial podcast

“Sam Harris is the most intellectually courageous man I know, unafraid to speak truths out in the open where others keep those very same thoughts buried, fearful of the modish thought police. With his literate intelligence and fluency with words, he brings out the best in his guests, including those with whom he disagrees.” -- Richard Dawkins, author of The Selfish Gene

“Civilization rests on a series of successful conversations.” —Sam Harris

Sam Harris—neuroscientist, philosopher, and bestselling author—has been exploring some of the most important questions about the human mind, society, and current events on his podcast, Making Sense. With over one million downloads per episode, these discussions have clearly hit a nerve, frequently walking a tightrope where either host or guest—and sometimes both—lose their footing, but always in search of a greater understanding of the world in which we live. For Harris, honest conversation, no matter how difficult or controversial, represents the only path to moral and intellectual progress.

This book includes a dozen of the best conversations from Making Sense, including talks with Daniel Kahneman, Timothy Snyder, Nick Bostrom, and Glenn Loury, on topics that range from the nature of consciousness and free will, to politics and extremism, to living ethically. Together they shine a light on what it means to “make sense” in the modern world.

Sam Harris is the author of the bestselling books The End of Faith, Letter to a Christian Nation, The Moral Landscape, Free Will, and Lying.  The End of Faith won the 2005 PEN Award for Nonfiction and his work has been published in more than 20 languages. He has written for the New York Times, The Los Angeles Times, the Economist, the Times (London), the Boston Globe, the Atlantic, the Annals of Neurology, and elsewhere. He received a degree in philosophy from Stanford University and a Ph.D. in neuroscience from UCLA.

“Harris displays his skills as an interviewer and conversationalist capable of clarifying complex ideas and engaging scholars from diverse backgrounds and fields of study on their areas of expertise. . . . The result is a collection full of stimulating, nuanced, and deeply informed discussions on both abstract concepts (the future of humanity; the nature of reality) and hot-button current events (the #MeToo movement).” — Publishers Weekly

“Free and open debate, in the best sense of the word. . . .  The book’s advantage over the podcast is that readers can linger as they need to and cherry-pick interviews at will. Recommended for anyone who wants to spend time with intelligent minds wrestling not with each other but with understanding.” — Kirkus Reviews

“There's only one podcast I never miss, and it’s the one that has the most appropriate title in all of broadcasting. Does anyone simply make more sense than Sam Harris?” — Bill Maher

“Sam Harris is the most intellectually courageous man I know, unafraid to speak truths out in the open where others keep those very same thoughts buried, fearful of the modish thought police. With his literate intelligence and fluency with words, he brings out the best in his guests, including those with whom he disagrees.”
— Richard Dawkins, author of The Selfish Gene

“One of the most consistently intelligent and thought-provoking shows out there, and not just in the podcast space. Sam’s is a much-needed voice during these unprecedented times.” — Ian Bremmer, author of Us vs. Them: The Failure of Globalism

“Even in casual discussion, Sam is intelligent, educated, honest, considered and brave. He’s really not cut out for the Internet.” — Ricky Gervais

“Sam Harris is a genius and his podcast explores many of the important issues of our time. (Yes it’s as good as that sounds.) Sam is a voice of reason and science in an era that needs both more than ever. The Making Sense podcast essentially launched my presidential campaign.” — Andrew Yang

“I don’t have many can’t miss podcasts, but Making Sense is right at the top of that short list. Sam Harris and his varied and fascinating guests generate light but not heat. The choir is neither preached to nor pointlessly provoked. I have never finished a single episode without having learned something and being given pause for real thought.” — Stephen Fry

“Do yourself a favor, broaden your perspectives and listen to the Making Sense podcast. Whatever your politics, you will find ideas and points of views you've never considered before, in fields you don't know, from neuroscience to computer science to culture.” — Anne Applebaum, author of Gulag

“I’ve been an avid listener to Sam's podcast from the beginning and not one episode goes by without me learning something new about life, culture, politics, religion, history, and especially the human mind. Sam is an enlightened, rational voice in a world that needs it now, perhaps more than ever, especially if we are to survive, or thrive, in spite of the collective weaknesses that make us human.” — Neil deGrasse Tyson, Astrophysicist, American Museum of Natural History

“To the raging controversies of the day, Sam Harris adds a voice of civility and reason.” — Lawrence Wright, author of The Looming Tower

“Making Sense brings the power and patience of contemplation to the art of conversation. Sam Harris models not only how to articulate complex ideas, but also how to truly hear the ideas of others. This is cognitive jazz at its best.” — Douglas Rushkoff, author of Present Shock

“It's no wonder that Sam attracts a huge audience.  He is a thinker with his own ideas, so his interviews are some of the most interesting conversations you are ever likely to hear.” — Peter Singer, author of Animal Liberation

“Sam Harris is tremendous at his job; sharp, skeptical in just the best sense, and full of curiosity and openness. He's a terrific questioner, and he greatly enlivens and improves public discourse.”  — Cass Sunstein, author of Can It Happen Here?: Authoritarianism in America

“In the huge world of interviewers, Sam Harris stands out at the top for his probing questions, and for his own thoughtful views.” — Jared Diamond, author of Guns, Germs, and Steel

“There is no podcast that approaches the intellectual rigor and open mindedness of Sam Harris' Making Sense. It's a regular dose of sane, patient reason and dialogue. In a tribalized world, it reveres the individual, inquisitive mind. And Sam has some balls to talk honestly where so many others won't.” — Andrew Sullivan, author of The Conservative Soul

“Sam Harris is a true public intellectual: he thinks deeply about a wide range of issues and engages fearlessly with controversial topics and unpopular opinions. You don't have to agree with him to learn from him—I always come away from his show with new insights and new questions.” — Adam Grant, author of Originals and Give and Take, and host of the TED podcast WorkLife

“Sam has given us one of the greatest podcasts in the world for clear thinking. We are better equipped to face the perils and uncertainties of life with it in the air. It’s a stand-out leader in a cluttered field and being Sam’s guest on it was a career highlight.” — Derren Brown, author of Happy: Why More or Less Everything is Absolutely Fine

“In a nation and at a time that seems to have lost all capacity for nuance and reason in its public discourse, Making Sense serves a deep and important purpose: allowing people to discuss pressing matters in careful and yet exciting ways, to the benefit of us all.  Sam Harris, ever brilliant, is a national treasure.” — Nicholas Christakis, author of Blueprint: The Evolutionary Origins of a Good Society

“Of all the podcasts available, the one nobody should miss is Making Sense. Every episode is stimulating. In an era when everyone seems to have lost their reason, here is one of the few places where reason remains safe.” — Douglas Murray, author of The Strange Death of Europe and The Madness of Crowds

“There are precious few spaces in the media landscape where difficult, rigorous and respectful conversations can play out at substantial length, without agenda. Sam Harris created the model for such illuminating exchange, and the Making Sense podcast is a treasure trove of discussions with many of the most compelling and fascinating minds of our era.”  — Thomas Chatterton Williams, contributing writer, The New York Times Magazine, author of Self Portrait in Black and White.

"Making Sense is a refueling station for the mind, and I visit it regularly. As an interviewer, Sam is both rigorous and generous. His show is completely devoid of the cheap shots and tribal bickering that characterize so much of podcasting. Making Sense is joyful play of the mind, without a trace of the partisan cretinism that disfigures the vast majority of our discourse these days." — Graeme Wood, staff writer at The Atlantic and the author of The Way of the Strangers: Encounters with the Islamic State

"Making Sense is one of the most thought-provoking podcasts that I've come across. Sam Harris does an incredible job probing—and finding answers to—some of the most important questions of our times.” — Siddhartha Mukherjee, author of The Emperor of All Maladies and The Gene: An Intimate History

“In the rapidly expanding universe of podcasts, Sam Harris's Making Sense is a firmly established galaxy of brilliant minds orbiting Sam's shrewd but solar intelligence. I am frequently late for work because I start listening while shaving and can't bring myself to hit pause.” — Niall Ferguson, author of The Ascent of Money