Seasons of the Storm (Paperback) 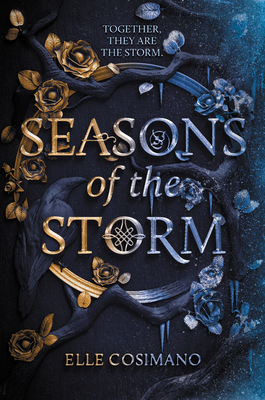 Seasons of the Storm (Paperback)

For fans of Maggie Stiefvater and Lailani Taylor, this book is an emotional and suspenseful ride from start to finish. Jack Sommers is a Winter, an immortal physical embodiment of the season on earth. Every year he must hunt the season before him and be hunted by the season after, which is difficult when you’re in love with them. Jack and Fleur’s dilemma causes them to put unstoppable things in motion, changing their entire nature forever. -- Makayla R., Colfax Café Manager

For fans of Maggie Stiefvater and Laini Taylor, a perfect storm lies ahead in this riveting fantasy duology opener from award-winning author Elle Cosimano.

One cold, crisp night, Jack Sommers was faced with a choice—live forever according to the ancient, magical rules of Gaia, or die.

Jack chose to live, and in exchange, he became a Winter—an immortal physical embodiment of the season on Earth. Every year, he must hunt the Season who comes before him. Summer kills Spring. Autumn kills Summer. Winter kills Autumn. And Spring kills Winter.

Jack and Fleur, a Winter and a Spring, fall for each other against all odds. To be together, they’ll have to escape the cycle that’s been forcing them apart. But their creator won’t let them go without a fight.

Elle Cosimano's debut thriller, Nearly Gone, was an Edgar Award finalist, won the International Thriller Award for Best Young Adult Novel, and was awarded the Mathical Book Award recognizing mathematics in children’s literature. Her novel Holding Smoke was a finalist for the Bram Stoker Award and the International Thriller Award. Her books for young adults have appeared on several statewide school and library reading lists. Elle lives in the Blue Ridge Mountains of Virginia with her husband, her sons, and her dog. You can learn more about her at www.ellecosimano.com.

"Seasons of the Storm is a mind-boggling mix of mythology, nature, competition, and powerfully original characters. I couldn't read this book fast enough—captivating on every level." — Megan Shepherd, New York Times bestselling author

"Cosimano tells a story of the bonds of friendship and the power of hope for the future. The themes of friendship despite differences and self-sacrifice shine through." — Kirkus Reviews

"With lots of action and an exploration of when and how much to trust those in authority, the story asks whether you will be the user or the used." — Booklist

"Narration alternates between Jack and Fleur, adding some depth to the action. It’s the scenes wherein the Seasons whip up their elemental powers that really grab attention, with vivid descriptions of murderous vines, killer waves, and suffocating fire. Fans of Holly Black and April Genevieve Tucholke will hope that their time with these characters is not yet up." — Bulletin of the Center for Children’s Books

"[A] fast-paced mythological fantasy. Cosimano uses the rhythm of nature to create a whirlwind of romance and friendship that illustrates both the power of choice and the strength in differences." — Publishers Weekly