The School for Whatnots (Hardcover) 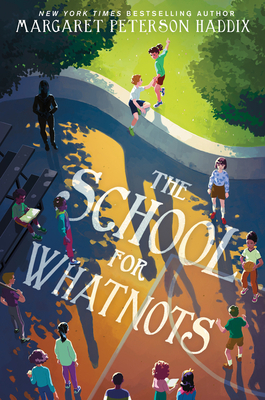 The School for Whatnots (Hardcover)

No matter what anyone tells you, I’m real.

That’s what the note says that Max finds under his keyboard.

He knows that his best friend, Josie, wrote it. He’d know her handwriting anywhere. But why she wrote it—and what it means—remains a mystery.

Ever since they met in kindergarten, Max and Josie have been inseparable. Until the summer after fifth grade, when Josie disappears, leaving only a note, and whispering something about “whatnot rules.”

But why would Max ever think that Josie wasn’t real? And what are whatnots?

As Max sets to uncover what happened to Josie—and what she is or isn’t—little does he know that she’s fighting to find him again, too. But there are forces trying to keep Max and Josie from ever seeing each other again. Because Josie wasn’t supposed to be real.

This middle grade thriller from Margaret Peterson Haddix delves into the power of privilege, the importance of true friendship, and the question of humanity and identity. Because when anyone could be a whatnot, what makes a person a real friend—or real at all?

Margaret Peterson Haddix grew up on a farm in Ohio. As a kid, she knew two girls who had the exact same first, middle, and last names and shared the same birthday—only one year apart—and she always thought that was bizarre.

As an adult, Haddix worked as a newspaper reporter and copy editor in Indiana before her first book, Running Out of Time, was published. She has since written more than forty books for kids and teens, including the Greystone Secrets series, the Shadow Children series, the Missing series, the Children of Exile series, and lots of stand-alones. Haddix and her husband, Doug, now live in Columbus, Ohio, where they raised their two kids. You can learn more about her at www.haddixbooks.com.

"Josie and Max find out the truth behind the Whatnot Corporation, leading them to unravel a mystery that has them confronting the true meaning of friendship and reconciling the inequalities the company has prospered from and contributed to. The omniscient narrator and strong pacing will keep readers engaged and racing to the end. Meanwhile, the well-rounded characters will elicit empathy and inspire discussion of systemic socio-economic inequalities. An intriguing novel that highlights social class disparities and the importance of friendship." — Kirkus Reviews (starred review)

"An innovative story of friendship with touches of science fiction, fantasy, and mystery, along with a heavy, dark dose of capitalism. The thought-provoking plot exposes the glaring disparities between the haves and the have-nots. VERDICT A solid purchase with appeal for older readers; recommended for any library, but especially those where sci-fi and mysteries circulate well." — School Library Journal

"Haddix offers a scarily realistic alternate reality, with the seemingly infinite lengths the rich will go to ensure a perfect world for themselves at the expenses of others and the things parents will do to protect their children. A secretive narrator keeps a sense of intrigue, heightening the tension. The book raises questions that will have the proverbial cogs turning long after the book ends." — Bulletin of the Center for Children’s Books

"Less a story about androids than one about children, friendship, and economic inequality, the narrative poses and solves a series of puzzles that leads to a Westing Game–style confrontation with Gonzagaga herself . . . Feel-good wish-fulfillment fantasy." — Horn Book Magazine