Black Enough: Stories of Being Young & Black in America (Paperback) 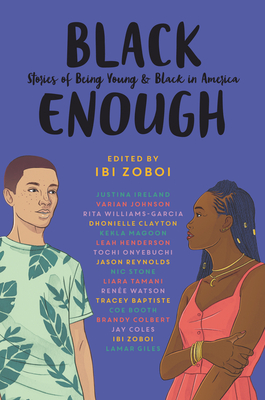 Edited by National Book Award finalist Ibi Zoboi, and featuring some of the most acclaimed bestselling Black authors writing for teens today—Black Enough is an essential collection of captivating stories about what it’s like to be young and Black in America. A selection of the Schomburg Center's Black Liberation Reading List.

Black is...sisters navigating their relationship at summer camp in Portland, Oregon, as written by Renée Watson.

Black is…three friends walking back from the community pool talking about nothing and everything, in a story by Jason Reynolds.

Black is urban and rural, wealthy and poor, mixed race, immigrants, and more—because there are countless ways to be Black enough.

Ibi Zoboi holds an MFA from Vermont College of Fine Arts. Her novel American Street was a National Book Award finalist and a New York Times Notable Book. She is also the author of Pride and My Life as an Ice Cream Sandwich, a New York Times bestseller. She is the editor of the anthology Black Enough. Born in Haiti and raised in New York City, she now lives in New Jersey with her husband and their three children. You can find her online at www.ibizoboi.net.

Sona Charaipotra & Dhonielle Clayton met while attending the New School’s acclaimed Writing for Children MFA program. Sona is a journalist who has written for the New York Times, People, Parade, Cosmopolitan, and other major media. Dhonielle is a librarian at a middle school in Harlem, and taught English at a cutthroat ballet academy. Together, the pair cofounded CAKE Literary, a boutique book packaging company with a decidedly diverse bent. Find them online at www.cakeliterary.com.

Lamar Giles writes for teens and adults. He is the author of the Edgar Award finalists Fake ID and Endangered as well as the critically acclaimed Overturned, Spin, and The Last Last-Day-of-Summer. He is a founding member of We Need Diverse Books and resides in Virginia. Visit him online at www.lamargiles.com.

Justina Ireland is the New York Times bestselling author of Dread Nation and its sequel, Deathless Divide, as well as Vengeance Bound and Promise of Shadows. She is also one of the authors creating the next generation of Star Wars novels entitled the High Republic and is the author of the middle grade Star Wars adventures Lando’s Luck, Spark the Resistance, and A Test of Courage. She lives with her husband, kid, and dog in Maryland. You can visit her online at www.justinaireland.com.

Kekla Magoon is the author of twelve novels, including The Rock and the River, How It Went Down, X: A Novel (with Ilyasah Shabazz), and the Robyn Hoodlum Adventure series. She has received an NAACP Image Award, the Boston Globe-Horn Book Award, the John Steptoe New Talent Award, three Coretta Scott King Honors, The Walter Award Honor, and the In the Margins Award, and she has been long listed for the National Book Award. She teaches writing for children and young adults at Vermont College of Fine Arts. Visit her online at keklamagoon.com.

A poet
An artist

One black
One white

Liara Tamani lives in Houston, Texas. She holds an MFA in writing from Vermont College. She is the author of the acclaimed Calling My Name, which was a 2018 PEN America Literary Award Finalist and a 2018 SCBWI Golden Kite Finalist, and All the Things We Never Knew. www.liaratamani.com

Rita Williams-Garcia's Newbery Honor Book, One Crazy Summer, was a winner of the Coretta Scott King Author Award, a National Book Award finalist, the recipient of the Scott O’Dell Award for Historical Fiction, and a New York Times bestseller. The two sequels, P.S. Be Eleven and Gone Crazy in Alabama, were both Coretta Scott King Author Award winners and ALA Notable Children’s Books. Her novel Clayton Byrd Goes Underground was a National Book Award finalist and winner of the NAACP Image Award for Youth/Teen Literature. Rita is also the author of five other distinguished novels for young adults: Jumped, a National Book Award finalist; No Laughter Here, Every Time a Rainbow Dies (a Publishers Weekly Best Children’s Book), Fast Talk on a Slow Track (all ALA Best Books for Young Adults); and Blue Tights. Rita Williams-Garcia lives in Jamaica, New York, with her husband and has two adult daughters. You can visit her online at www.ritawg.com.

★ “Each entry is deftly woven and full of such complex humanity that teens will identify with and see some of their own struggles in these characters... This collection presents the beauty of black humanity in all its many forms.”
— School Library Journal (starred review)

“Ibi Zoboi, author of National Book Award finalist American Street and Jane Austen update Pride, dazzles again with this stunning, marvelously diverse collection of 17 stories of the teen experience by black authors [writing] ‘about teens examining, rebelling against, embracing, or simply existing within their own idea of blackness.’”
— Buffalo News

★ Praise for AMERICAN STREET: “Mixing gritty street life with the tenderness of first love, Haitian Vodou, and family bonds, the book is at once chilling, evocative, and reaffirming.”
— Publishers Weekly (starred review)

★ Praise for AMERICAN STREET: “Filling her pages with magic, humanity, tragedy, and hope, Zoboi builds up, takes apart, and then rebuilds an unforgettable story. This book will take root in readers’ hearts.”
— Kirkus Reviews (starred review)

★ Praise for AMERICAN STREET: “A breathtaking story about contemporary America that will serve as a mirror to some and a window for others, and it will stay with anyone who reads it.”
— School Library Journal (starred review)

Praise for AMERICAN STREET: “Zoboi urges us to examine the American dream to see if there is room within it to hold the ones we love.”
— Ebony Magazine

Praise for AMERICAN STREET: “Will reach young readers regardless of their background.”
— Bulletin of the Center for Children’s Books

Praise for AMERICAN STREET: “A poignant meditation on one girl’s struggle to find her way in a new world.”
— Nicola Yoon, New York Times bestselling author of The Sun is Also a Star and Everything, Everything

Praise for AMERICAN STREET: “Brimming with culture, magic, warmth, and unabashed rawness, “American Street” is ultimately a blistering tale of humanity. This is “Manchild in the Promised Land,” for a new generation, and a remarkable debut from Zoboi, who without question is an inevitable force in storytelling.”
— Jason Reynolds, award-winning co-author of All American Boys

Praise for AMERICAN STREET: “Zoboi’s nascent storytelling gifts ensnare from page one. To this spellbinding voice of the next generation, I bow.”
— Rita Williams-Garcia, New York Times bestselling author and three-time winner of the Coretta Scott King Award