God and Starbucks: An NBA Superstar's Journey Through Addiction and Recovery (Paperback) 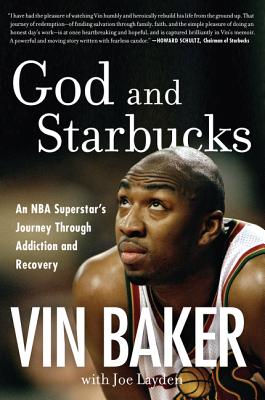 By Vin Baker, Joe Layden
Email or call for price. Handling fee may apply.
Special Request - May Not Be Available

An astonishing memoir of redemption—the moving story of a former top NBA player who miraculously rebounded from a monumental fall thanks to hard work and his deep, transformative faith.

Sixteen years ago, Vin Baker was an NBA All-Star, an Olympic Gold medalist, and a multimillionaire. While he excelled on the court, Vin harbored a dark secret: a dependency on drugs and alcohol that began after the clean-cut preacher’s son turned pro. Eventually becoming a full-blown yet functional alcoholic, Vin convinced himself he played better under the influence—until his addiction cost him his basketball career, his fortune, and his health.

But Vin’s story isn’t a tragic fall from grace. It is a joyous tale of salvation. For Vin, hitting rock bottom was a difficult yet transformative experience that led him to renew his relationship with God and embrace life in a rich and fulfilling new way. Today the manager of a Starbucks and a youth minister, Vin has found more security and happiness in his ordinary working life than in all his years in the glamorous world of professional basketball.

God and Starbucks is a wise and unflinching look at the real dangers of addiction and the importance of taking charge of your life with meaning and purpose. It’s a powerful memoir about reaching the top and beginning again from the bottom—an inspiring personal tale of humility and grace that reminds us what is truly important in our lives.

Vin Baker spent thirteen years in the NBA, including four as an all-star. A graduate of the University of Hartford, where he remains the school’s career leader in points and rebounds, he won a gold medal playing for the US Olympic team in 2000 and was selected by the Milwaukee Bucks as the eighth pick in the 1993 NBA draft. He is an assistant pastor and youth minister in his hometown of Old Saybrook, Connecticut. He also works as a consultant for the Bucks and is a member of the Professional Basketball Alumni Association. Baker lives in Old Saybrook with his family.

An award-winning journalist and bestselling author, Joe Layden has written more than thirty books, including The Last Great Fight, which was named one of the best sports books of 2007 by Sports Illustrated and the American Library Association. He is also the co-author of the New York Times bestsellers There and Back Again and The Rock Says. . . . He lives in upstate New York.

“Vin Baker’s skills and abilities defined a generation of big men. While he was fighting incredible basketball players on the court, privately he was struggling with a far greater opponent in addiction. His honest and moving story will inspire change!”
— Adonal Foyle, author of Winning the Money Game

“A wonderful book about God’s power to give do-overs while illuminating what is possible in our hour of darkness. Vin Baker’s engrossing story is a towering example of how salvation is found through faith and hard work.”
— Quinton Dixie, author of This Far by Faith