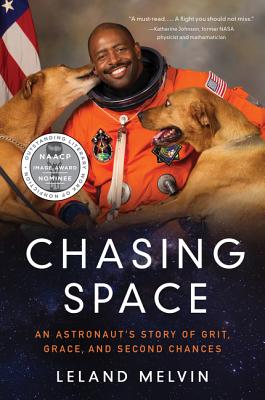 Leland Melvin will soon become one of your favorite astronauts. His journey to space is an inspiring story of hard work and a bit of luck. And he has the best astronaut photo ever taken! -- Scott P., Aspen Grove and Park Meadows Store Manager

In this revelatory and moving memoir, a former NASA astronaut and NFL wide receiver shares his personal journey from the gridiron to the stars, examining the intersecting roles of community, perseverance and grace that align to create the opportunities for success.

Leland Melvin is the only person in human history to catch a pass in the National Football League and in space. Though his path to the heavens was riddled with setbacks and injury, Leland persevered to reach the stars.

While training with NASA, Melvin suffered a severe injury that left him deaf. Leland was relegated to earthbound assignments, but chose to remain and support his astronaut family. His loyalty paid off. Recovering partial hearing, he earned his eligibility for space travel. He served as mission specialist for two flights aboard the shuttle Atlantis, working on the International Space Station.

In this uplifting memoir, the former NASA astronaut and professional athlete offers an examination of the intersecting role of community, determination, and grace that align to shape our opportunities and outcomes. Chasing Space is not the story of one man, but the story of many men, women, scientists, and mentors who helped him defy the odds and live out an uncommon destiny.

As a chemist, athlete, engineer and space traveler, Leland’s life story is a study in the science of achievement. His personal insights illuminate how grit and grace, are the keys to overcoming adversity and rising to success.

A former wide receiver for the Detroit Lions, Leland Melvin is an engineer and NASA astronaut. He served on the space shuttle Atlantis as a mission specialist and was named the NASA Associate Administrator for Education in October 2010. He also served as the cochair on the White House’s Federal Coordination in Science, Technology, Engineering, and Mathematics (STEM) Education Task Force, developing the nation’s five-year STEM education plan. He is the host of the Lifetime show Child Genius and a judge for ABC’s BattleBots. He holds four honorary doctorates and has received the NFL Player Association Award of Excellence. He lives in Lynchburg, Virginia.

“Though Melvin refers to his story as one of grit and grace, he does so without a shred of ego… Second chances played a key role in Melvin’s ability to overcome obstacles and achieve his many dreams, and he’ll have readers wondering how many chances it would take them to do the same.” — Booklist

“A story of passion and perseverance told by a humble hero. Insightful and inspiring!” — Angela Duckworth, New York Times bestselling author of Grit

“Henry Ford said, If you think you can or you think you can’t, you’re right.” Leland Melvin proves it. His story inspires me and reminds me of the value of staying positive and pushing through adversity. Chasing Space is uplifting and motivating.” — Simon Sinek, Optimist and author of Start with Why and Leaders Eat Last

“As a Black woman researcher at NASA in the 1950s, I found Chasing Space very revealing. While I performed the calculations that assisted men on their missions to the moon, I always hoped that in my lifetime that I would see a Black man fly into space. Not only did this book make me feel as if I were on this journey with Leland, through his eyes, it reminded me of how small the planet really is, and therefore, how insignificant our differences as humans are—the kind of issues that kept my own legacy at NASA hidden for so long. Chasing Space is a must read—a flight you shouldn’t miss.” — Katherine Johnson, former NASA physicist and mathematician, and recipient of the Presidential Medal of Freedom

“Nerd-kid almost burns down his house with a chemistry experiment gone bad, then grows up and plays for the National Football League, then flies to the International Space Station. That actually happened, and it is quite a story. In Chasing Space, Leland Melvin, the former NASA astronaut, shares this remarkable trajectory of his life. En route he tackles stupendous obstacles with dogged determination, showing you what is indeed possible in life—if you believe.” — Neil deGrasse Tyson, Astrophysicist at the American Museum of Natural History and author of Astrophysics for People in a Hurry

“Leland’s story moves fast from the deck of his home-built skateboard to the flight deck of the space shuttle. He shows us how he made the best of every opportunity and every setback on his way from his hometown to outer space. It moves fast; once you get started you’ll want to join the chase.”   — Bill Nye, CEO, The Planetary Society

“For someone of such remarkable achievement, Melvin demonstrates impressive humility and depth of character as he discusses overcoming myriad setbacks… Melvin writes honestly about his mistakes as well as his triumphs, urging readers to pursue their dreams with determination and hard work.”   — Publishers Weekly (starred review)

“Leland has helped me connect to the Universe I searched for so long since being a kid. From being obsessed with the TV series In Search Of to discovering Carl Sagan’s world, space always fascinated me. Meeting Leland allowed me to connect even deeper into the cosmos on so many levels. In 2009 Leland took one of my BBC tees to space as well as a piece of music we worked on together, which as you can imagine meant a lot to me. He also introduced me to Katherine Johnson and has worked closely with my mother on my charity to help further educate kids from my hometown. I’m happy to be able to call Leland a friend and looking forward to many more years of learning with him. And now he will take you, too, on a journey.” — Pharrell Williams