Doctor Who: The Whoniverse: The Untold History of Space and Time (Hardcover) 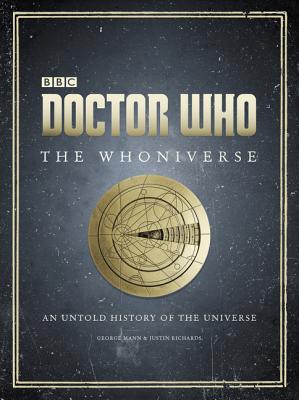 Complete with full-color illustrations, maps, charts, and artifacts, the definitive, essential companion to the Doctor’s world—and many more.

Doctor Who: The Whoniverse is a never-before-seen history of the Human Race—from the formation of the Earth around the Racnoss eggs, and the creation of life by the destruction of the last Jagaroth spaceship, through to the eventual expansion of the sun and end of the world and beyond to the New Earth, and Utopia.

Along the way, the book explores the untold histories of other planets and other lifeforms as they have interacted with humanity. We examine the Daleks and Cybermen, the Time Lords and the Sontarans, the Ice Warriors, Silurians, Weeping Angels, and many, many more. Additionally, we visit Gallifrey and Skaro, Mondas and Telos, Mars and Sontar.

Filled with full-color illustrations, maps, charts, and artifacts throughout, Doctor Who: The Whoniverse is a treasury of accumulated knowledge, scholarly erudition and accumulated folk wisdom from the worlds of Doctor Who.

Doctor Who: The Whoniverse explores:

Justin Richards has written for stage and screen as well as novels and graphic novels. He writes extensively for children and has also co-authored several action thrillers for young adults with the acknowledged master of the genre, Jack Higgins. The first two novels in his adult science fiction Never War series, The Suicide Exhibition and The Blood Red City, were published in 2013 and 2014, respectively. Justin acts as creative consultant to BBC Books' Doctor Who titles, and he has penned quite a few himself. Married with two children (both boys), Justin lives and works in Warwick, England, within sight of one of Britain's bestpreserved castles.