Art of Neil Gaiman: The Story of a Writer with Handwritten Notes, Drawings, Manuscripts, and Personal Photographs (Paperback) 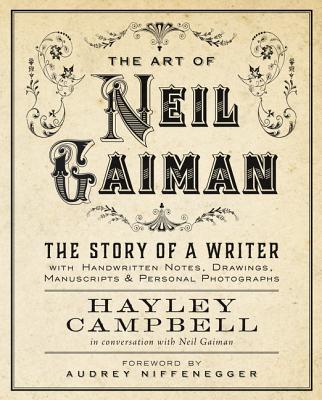 Art of Neil Gaiman: The Story of a Writer with Handwritten Notes, Drawings, Manuscripts, and Personal Photographs (Paperback)

Now in paperback, the utterly comprehensive, lavishly illustrated, and fully authorized account of the life and work of one of the world’s great storytellers, Neil Gaiman.

Novelist, comics writer, scriptwriter, poet, and occasional artist, there are few creative avenues Neil Gaiman hasn’t ventured down—from unforgettable books like The Ocean at the End of the Lane and American Gods to groundbreaking comics and graphic novels like The Sandman and Violent Cases; from big-screen fantasies like Coraline and Stardust to small-screen epics like Doctor Who and Neverwhere; and from short stories to songwriting, stage plays to radio plays, journalism to filmmaking, and all points in between.

The Art of Neil Gaiman is the first book to tell the full story of his amazing creative life. Never-before-seen manuscripts, notes, cartoons, drawings, and personal photographs from Neil’s own archive are complemented by artwork and sketches from all of his major works and his own intimate recollections. Each project is examined in turn, from genesis to fruition, and positioned in the wider narrative of Gaiman’s creative life, affording unparalleled access to the inner workings of the writer’s mind.

Hayley Campbell was born in England and lived in Australia for twenty years before moving to London, where she writes for the New Statesman, The Comics Journal, and McSweeney's. She is working on her first novel and can often be found committing terrible acts of amateur taxidermy.