A Line of Blood: A Novel (Hardcover) 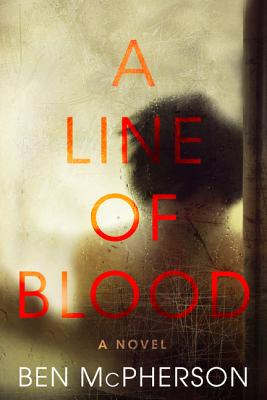 By Ben McPherson
$25.99
Special Request - May Not Be Available

“Surely an unspoken fear of parents is that they will discover that their child has some dark secret, that their normal, well-adjusted, happy child is hiding something. McPherson introduces us to just such a family in a whodunit with many layers of psychological intrigue, secrets, and unspoken emotion. Alex and Millicent and their son, Max, find themselves in the middle of a murder investigation and what was once taken for granted begins to unravel around them. This is a must-read for anyone who loves being in the clutches of a brilliant thriller with anything but a straight line to the conclusion.”
— Linda Schaefer (E), Learned Owl Book Shop, Hudson, OH

In one of the most entertaining and twisty thrillers of the year a London family, a mother, father and young son, must deal with the murder of their secretive next door neighbor and the intrusive police investigation that follows. Readers will be faced with ever shifting and increasingly frightening suspicions that one or all of them had something to do with it.

Alex Mercer loves his family more than anything. His wife Millicent and their precocious eleven-year-old son Max are everything to him, his little tribe. When he is with them all is right with the world. But when he and Max find their next door neighbour dead in his bathtub, their lives are suddenly and irrevocably changed. Max is surprisingly fascinated by the dead body, and Alex is understandably anxious about how Max will react later, once he takes it all in. And Alex is increasingly impatient for the police to conclude their investigation and call this the suicide that it so clearly was.

But as new information surfaces, it becomes clear that there is more to this than anyone is saying... Why was the neighbour charging his home improvements to the Mercers’ address? How did Millicent’s bracelet end up in his apartment? And why, in fact, did Max lead his father into the house on the quiet summer night that they found the corpse? As suspicion grows between the three, the once close-knit family starts to disintegrate. Is Alex really the loving husband we believe him to be? And where is Millicent really going when she disappears for hours, walking the parks of London, stewing over something that she can’t forget?

Each of them is suffering. Each has something to hide. And as each questions how well they really know each other, they must decide how far they’ll go to protect themselves-and each other-from investigators who are watching every move they make. Just waiting for someone to make a mistake.

Ben McPherson’s debut novel was the highly acclaimed A Line of Blood. He is a television producer and director, as well as a writer, and for more than ten years worked for the BBC, among other outlets. He is also an occasional columnist for Aftenposten, Norway’s leading quality daily, and lives in Oslo with his wife and two children.

“An impressive slice of domestic suspense… McPherson is a dab hand at creating realistically flawed characters to whom one just about manages to give the benefit of the doubt, and the ending… is still shocking.”
— The Guardian

“Fascinating. From the first page of A LINE OF BLOOD, I was hooked. I couldn’t put it down!”
— Lisa Jackson, New York Times bestselling author

“McPherson’s mystery is carefully constructed, a literary house of cards. Layer upon layer of revelation increases the tension.”
— Kirkus Reviews

“McPherson’s debut prolongs suspense until the dreadful truth becomes undeniable, raising the questions of how these well-drawn characters will survive and how justice is best served.”
— Library Journal

“A compelling read for its vivid portrait of a family whose secrets are hidden behind a mask of normalcy until a violent act rips it away… This is a novel for those who like their suspense written in dark tones.”
— New York Journal of Books

“McPherson displays a rare skill for creating characters with depth in a world that is splintering around them.”
— Daily Mail (UK)

“Gripping from the get-go, A Line of Blood will have readers wondering what they might be capable of in the face of the terrible isolation of self within a family running off the rails.”
— Tami Hoag, #1 New York Times Bestselling author of Cold Cold Heart

“A family drama packed with suspense.”
— The Sunday Post (UK)

“Many good novels pose the question: how should you act in certain circumstances? This is the question McPherson puts, and the answer that he finds for his characters seems to me admirable and yet morally dubious. This is how it should be.”
— The Scotsman (UK)

“A Line of Blood delves deep into family dynamics for a psychological thriller with realistic twists that builds to a surprising denouement… [An] elegantly constructed plot reveals the secrets that bind these characters as well as pull them apart… An engrossing - and very dark - domestic thriller.”
— Washington Post

“To say that the book is fascinating and hard to put down would be an understatement.... Former relationships and shameful episodes in Alex and Millicent’s lives keep coming to light, making the tangle increasingly snarled rather than more understandable. And this quite effectively heightens the suspense.”
— ReviewingtheEvidence.com