Had I Known: A Memoir of Survival (Hardcover) 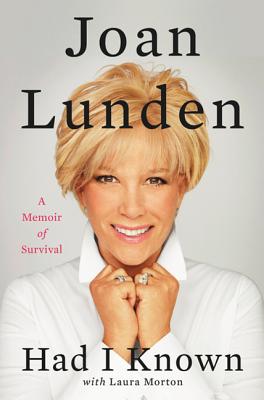 In this brave and deeply personal memoir, one of America’s most beloved journalists, mother, and New York Times bestselling author speaks candidly about her battle against breast cancer, her quest to learn about it and teach others, and the transformative effect it’s had on her life.

When former Good Morning America host Joan Lunden was diagnosed with breast cancer, she set out to learn everything about it to help her survive. With seven children counting on her, giving up was not an option. After announcing her diagnosis on Good Morning America, people all over the country rallied around Joan as she went into Warrior mode. Within a few months, after losing her hair, Joan appeared on the cover of People magazine bald, showing the world she could, and would, beat the disease. Determined to remain upbeat—to look in the mirror with a brave face—her resolve empowered women everywhere. The Today show quickly recruited Joan as a special correspondent and continues to follow her progress.

A deeply personal and powerful story of pain, persistence, and perseverance, Had I Known is a chronicle of Joan’s experience and the plan she formulated and followed to battle with her disease and treatment. As Joan reveals, while her journey was not easy, it profoundly changed her in unexpected ways. Her odyssey helped Joan redefine herself, her values, and most of all, her health. Following a new clean way of eating, Joan lost thirty pounds, became more aware of the food she was eating, and avoided many of the debilitating side effects of chemotherapy.

Dealing with the cancer also changed her perception of true beauty. Being attractive isn’t about the hair on your head—it’s about the strength and character you bring to everything you do. Positive yet down-to-earth, told with piercing honesty leavened with warmth and humor, Had I Known offers unforgettable, inspirational lessons for us all.

Joan Lunden was the co-host of Good Morning America for nearly two decades, bringing insight to the day's top stories, from presidential elections to health and wellness. Her bestselling books include Joan Lunden's Healthy Cooking, Joan Lunden's Healthy Living, Wake-Up Calls, and A Bend in the Road Is Not the End of the Road. Joan speaks all over the country about health and wellness, inspiration, and success. Her online TV channel created for the breast cancer community, ALIVE with Joan Lunden (AliveWithJoan.com), and her website, JoanLunden.com, have quickly become go-to sources of information, bringing together experts on a myriad of relevant topics for today's woman. In October 2014, Joan joined NBC's Today show as a Special Correspondent for Breast Cancer Awareness.

“Joan Lunden...has written a new inspirational book...For anyone that is going through what she did or has a loved one that is, this book will hopefully help you to keep fighting the fight.”
— - Red Carpet Crash