Your Own Worst Enemy (Hardcover) 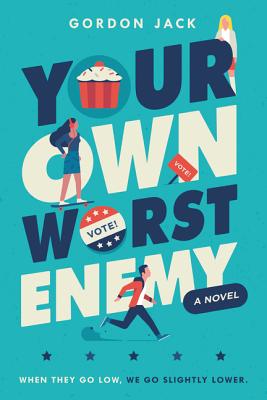 Your Own Worst Enemy (Hardcover)

For fans of Andrew Smith and Frank Portman and the movies Election and Ferris Bueller’s Day Off comes a hilarious and satirical novel about the highs and (very low) lows of the electoral process, proving that the popular vote is the one that matters most.

Stacey also didn’t count on Tony Guo, resident stoner, whose sole focus is on removing the school’s ban of his favorite chocolate milk, becoming the voice of the little guy, thanks to a freshman political “mastermind” with a blue Mohawk.

Three candidates, three platforms, and a whirlwind of social media, gaffes, high school drama, and protests make for a ridiculously hilarious political circus that just may hold some poignant truth somewhere in the mix.

Gordon Jack always wanted to be a writer. In third grade, he put that on his “What I Want to Be When I Grow Up” list, just behind astronaut and professional dog walker. While working toward this goal, he had jobs as an advertising copywriter, English teacher, librarian, and semiprofessional dog walker. The Boomerang Effect is his first novel. He lives in San Francisco with his family. Visit him online at www.gordon-jack.com or on Twitter @gordojack.

“Discerning readers will appreciate the timely and astute exploration of both the gravity and levity of identity politics and the critique of neoliberal ideals. Sharply observed-but so sharp it may be missed by less woke readers-this is satire at its best.” — Kirkus Reviews (starred review)

“The novel delivers some delectably insufferable politicians, pundits, media personalities, and fixers, all while making these teens relatably familiar. As politically smart as it is breathtakingly cynical, and it’s therefore perfect for readers who appreciate both qualities.” — Bulletin of the Center for Children’s Books

“The characters are complex and their thoughts and interactions intriguing. This breezy read features some romantic confusion, plenty of humor, and a few serious moments. A good choice.” — School Library Journal

“This briskly paced, at times riotously funny satire offers a subtle, discerning critique of both the contemporary U.S. political scene and the milieu of identity politics through top-notch storytelling.” — Publishers Weekly (starred review)

“Featuring flair that made Jack’s debut, The Boomerang Effect, an irresistible read, this mixes his trademark wit with reflection on the dysfunction of our current-day political system. With pacing, heart, and incisiveness, Jack has masterfully woven a tale that blends zany high school antics and biting socio-political satire.” — Booklist (starred review)