The Sleeper and the Spindle (Paperback) 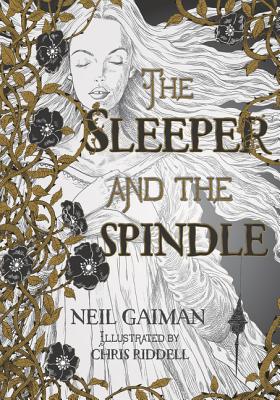 The Sleeper and the Spindle (Paperback)

In this captivating and darkly funny tale, Neil Gaiman and Chris Riddell have twisted together the familiar and the new as well as the beautiful and the wicked to tell a brilliant version of Snow White's (sort of) and Sleeping Beauty's (almost) stories.

The book is a beautiful work of art.

Chris Riddell is an acclaimed British artist who lives in Brighton, England. He has written and illustrated many books of his own, including Ottoline and the Yellow Cat and Ottoline Goes to School, and has illustrated, for Bloomsbury UK, The Graveyard Book; Coraline; and Fortunately, the Milk; as well as The Sleeper and the Spindle.

“Told in a way only Gaiman can” and featuring “stunning metallic artwork.” — GeekInsider

“A refreshing, much-needed twist on a classic story.” — The Guardian

“Unforgettable, unpredictable and utterly enchanting for anyone between the ages of seven and seventy.” — Amanda Craig, The New Statesman

“A wholly original reimagining...Riddell’s artwork is the reason a library should own this title in their collection. His details are exquisite.” — Voice of Youth Advocates (VOYA)

“A striking volume...thrums with malevolence and confounds our expectations...[the pictures] seem to writhe creepily on the page.” — Wall Street Journal

“Unabashedly feminist...So sonically tuned that it breathes on its own from the very first line. Adding to the wonder are Chris Riddell’s dazzling illustrations.” — New York Times Book Review