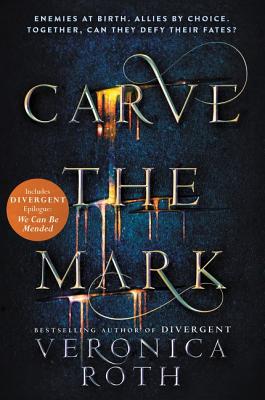 The best selling author of the Divergent series sweeps us off our feet with a new spectacular tail. Carve the Mark is a heart-throbbing story of Akos and Cyra, and the quest to save their family and uncover the secrets about their fate. He will die for his family. She will kill for hers. This book was a thrilling masterpiece; I would recommend this to anyone who seeks adventure and action.

Initially, I struggled to get into this book as the narration switched from first person for one character and third person for another. As I continued to read, however, I was able to overlook that and get to know the characters. It is a testament to Veronica Roth's character development that you can grow to love two very flawed characters. Once I got past the first one hundred pages or so, I had little difficulty getting through the story. I was pretty engrossed and despite the book being rather long, I read it quickly. There is so much happening in this story, and I wanted to see how it would all end. I am looking forward to the next in the series.

Praise for Carve the Mark:

“Roth offers a richly imagined, often brutal world of political intrigue and adventure, with a slow-burning romance at its core.” —ALA Booklist

Cyra Noavek and Akos Kereseth have grown up in enemy countries locked in a long-standing fight for dominance over their shared planet. When Akos and his brother are kidnapped by the ruling Noavek family, Akos is forced to serve Cyra, the sister of a dictator who governs with violence and fear. Cyra is known for her deadly power of transferring extraordinary pain unto others with simple touch, and her tyrant brother uses her as a weapon against those who challenge him. But as Akos fights for his own survival, he recognizes that Cyra is also fighting for hers, and that her true gift—resilience—might be what saves them both.

When Akos and Cyra are caught in the middle of a raging rebellion, everything they’ve been led to believe about their world and themselves must be called into question. But fighting for what’s right might mean betraying their countries, their families, and each other.

When the time comes, will they choose loyalty or love?

Veronica Roth is the #1 New York Times bestselling author of Divergent, Insurgent, Allegiant, Four: A Divergent Collection, and Carve the Mark. Ms. Roth and her husband live in Chicago. You can visit her online at www.veronicarothbooks.com.

★ “Roth skillfully weaves the careful world-building and intricate web of characters that distinguished Divergent, with settings that are rich with color, ripe for a cinematographer. Roth fans will cheer this new novel with its power to absorb the reader. Readers will be anxiously awaiting the sequel.” — Voice of Youth Advocates (VOYA) (starred review)

“This duology offers shades of George Lucas sprawl and influence, Game of Thrones clan intrigue, and a little Romeo & Juliet-style romance.  There are cliffhangers aplenty and dangling plot lines to lure us to the next book.” — USA Today

“Roth fans will rejoice at this new outing that focuses on themes familiar from her Divergent series: identity, individual versus social responsibilities, and ethical quandaries.” — Bulletin of the Center for Children’s Books

“Roth offers a richly imagined, often-brutal world of political intrigue and adventure, with a slow-burning romance at its core. Roth’s fans will be happily on board for the forthcoming sequel.” — Booklist

“The Divergent author builds out this new world—one reminiscent of Star Wars, with its discussions of ‘the current’ and ‘currentgifts’—while still presenting the stark brutality of the circumstances both protagonists find themselves in.” — Entertainment Weekly

“With her talent for action-packed plots and powerful characters, Roth’s latest is sure to be much talked-about all of 2017.” — Brightly

“Roth’s worldbuilding is commendable; each nation is distinct, interacting with the current in ways that give insight into her characters’ motivations. Readers will eagerly await a second installment.” — Publishers Weekly