What We Saw (Hardcover) 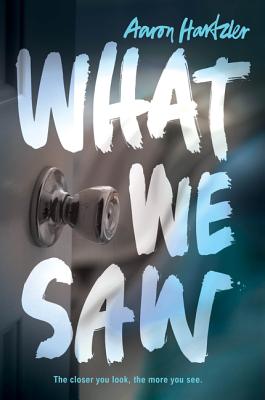 What We Saw (Hardcover)

“A smart, sensitive, and gripping story about the courage it takes to do what’s right.” —Deb Caletti, National Book Award finalist

Critically acclaimed memoirist Aaron Hartzler, author of Rapture Practice, takes an unflinching look at what happens to a small town when some of its residents commit a terrible crime.

The party at John Doone's last Saturday night is a bit of a blur. Kate Weston can piece together most of the details: Stacey Stallard handing her shots, Ben Cody taking her keys and getting her home early... But when a picture of Stacey passed out over Deacon Mills's shoulder appears online the next morning, Kate suspects she doesn't have all the details.

When Stacey levels charges against four of Kate's classmates, the whole town erupts into controversy. Facts that can't be ignored begin to surface, and every answer Kate finds leads back to the same questions: Who witnessed what happened to Stacey? And what responsibility do they have to speak up about what they saw?

This honest, authentic debut novel—inspired by the events in the Steubenville rape case—will resonate with readers who've ever walked that razor-thin line between guilt and innocence that so often gets blurred, one text at a time.

Aaron Hartzler is the author of the critically acclaimed YA memoir Rapture Practice. This is his first work of fiction.

“What We Saw is a smart, sensitive, and gripping story about the courage it takes to do what’s right. If you’re looking for your next favorite YA author, look no further. Aaron Hartzler’s got what it takes.” — Deb Caletti, National Book Award Finalist for HONEY, BABY, SWEETHEART

“This book is real. Like the protagonist, it’s vulnerable, honest, and incredibly brave. Kate’s story will be a lifeline for kids observing impossible situations and wondering where the right and wrong is in all of it. I could not put it down.” — Maya Van Wagenen, New York Times Bestselling Author of Popular

“A powerful tale of betrayal and a vital primer on rape culture.” — Kirkus Reviews (starred review)

“The author has delivered an important, powerful, and engrossing read that gives readers a lot to consider… A gripping narrative that begs to be discussed.” — School Library Journal

“An outstanding debut novel with so much heart, it is destined for the bestseller lists.” — Voice of Youth Advocates (VOYA)

PRAISE FOR RAPTURE PRACTICE: “...a hilarious first of its kind story that will surely inspire more.” — Kirkus Reviews (starred review)