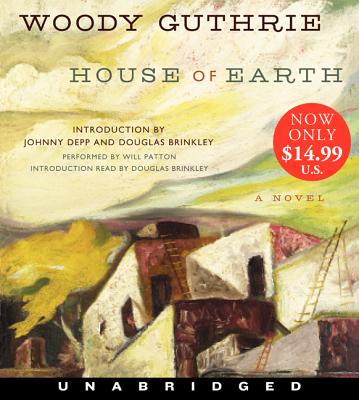 By Woody Guthrie, Will Patton (Read by), Douglas Brinkley (Read by)
$14.99
Special Request - May Not Be Available

Featuring the song, "House of Earth" performed by Lucinda Williams.

Finished in 1947 and lost to readers until now, House of Earth is Woody Guthrie's only fully realized novel, a powerful portrait of dust bowl America. It is the story of an ordinary couple's dreams of a better life and their search for love and meaning in a corrupt world.

Tike and Ella May Hamlin struggle to plant roots in the arid land of the Texas Panhandle. Living in a wooden shack, Tike yearns for a sturdy house that will protect them from the treacherous elements. He has the know-how to build a structure made from the land itself—a house of earth. Though they are one with the farm and with each other, the land on which Tike and Ella May live and work is not theirs. Thanks to larger forces, their adobe house remains painfully out of reach. House of Earth is a searing portrait of hardship and hope set against a ravaged landscape, a powerful tale of America from one of our greatest artists.