Find Me Unafraid: Love, Loss, and Hope in an African Slum (Hardcover) 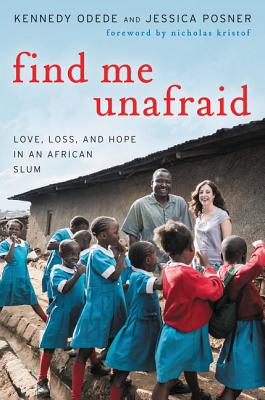 Find Me Unafraid tells the uncommon love story between two uncommon people whose collaboration sparked a successful movement to transform the lives of vulnerable girls and the urban poor. With a Foreword by Nicholas Kristof.

This is the story of two young people from completely different worlds: Kennedy Odede from Kibera, the largest slum in Africa, and Jessica Posner from Denver, Colorado.  Kennedy foraged for food, lived on the street, and taught himself to read with old newspapers. When an American volunteer gave him the work of Mandela, Garvey, and King, teenaged Kennedy decided he was going to change his life and his community. He bought a soccer ball and started a youth empowerment group he called Shining Hope for Communities (SHOFCO). Then in 2007, Wesleyan undergraduate Jessica Posner spent a semester abroad in Kenya working with SHOFCO. Breaking all convention, she decided to live in Kibera with Kennedy, and they fell in love.Their connection persisted, and Jessica helped Kennedy to escape political violence and fulfill his lifelong dream of an education, at Wesleyan University.

The alchemy of their remarkable union has drawn the support of community members and celebrities alike—The Clintons, Mia Farrow, and Nicholas Kristof are among their fans—and their work has changed the lives of many of Kibera’s most vulnerable population: its girls. Jess and Kennedy founded Kibera’s first tuition-free school for girls, a large, bright blue building, which stands as a bastion of hope in what once felt like a hopeless place. But Jessica and Kennedy are just getting started—they have expanded their model to connect essential services like health care, clean water, and economic empowerment programs. They’ve opened an identical project in Mathare, Kenya’s second largest slum, and intend to expand their remarkably successful program for change.

Ultimately this is a love story about a fight against poverty and hopelessness, the transformation made possible by a true love, and the power of young people to have a deep impact on the world.

Kennedy Odede is one of Africa's best-known community organizers and social entrepreneurs. Kennedy is a World Economic Forum Young Global Leader, a member of the Clinton Global Initiative, and a trustee of Wesleyan University.

Jessica Posner is the cofounder of Shining Hope for Communities. She is a nationally recognized social entrepreneur and activist. She won the 2010 Do Something Award and was named "America's top world-changer 25 and under" live on VH1. Jessica has been recognized as one of Wesleyan University's Distinguished Alumni, and has received the prestigious Echoing Green Fellowship.

“Suspenseful and absorbing, this true story of a man and a woman from two different worlds reveals how dramatically circumstances can change.”
— Publishers Weekly, Starred Review

“A well-wrought, inspiring tale of ‘change and justice’ in a part of the world where they are often sorely lacking.”
— Kirkus Reviews

“The past is not predictive, not when there are dreamers and doers, leaders and builders like Kennedy and Jess. Find Me Unafraid is an extraordinary book, courageously honest about their challenges, their victories, their losses and their achingly beautiful love.”
— Chelsea Clinton

“Find Me Unafraid tells the story of hundreds of girls flourishing-and by example, bringing their communities along with them—all because Jessica and Kennedy, two people from different lives, believed that every girl matters. This book offers the greatest of all gifts—hope.”
— Gloria Steinem

“Find Me Unafraid is a bright beacon, an important tale of perseverance, calling for the female leadership Africa needs and must have. Kennedy and Jessica’s vision is creating this next generation of women who will lead Kenya, our continent and the world.”
— Ellen Johnson Sirleaf, winner of the Nobel Peace Prize, President of Liberia

“Find Me Unafraid is an astounding story of love, hope, inspiration and triumph. It is a mesmerizing love story; two young people from very different cultures join forces to build a life together—and a new life filled with promise for others. I don’t think either of them understand the word ‘impossible.’ ”
— Mia Farrow

“Find Me Unafraid is a powerful reminder of an individual’s capacity to make a meaningful difference in the world around them. Kennedy and Jessica’s inspiring words are a soaring call to action for anyone who has confronted seemingly insurmountable odds -- and found hope.”
— Senator Cory Booker

“Kennedy and Jessica’s life and love story is humbling. It shows the power and beauty of transforming yourself in the course of transforming other people’s lives, even in the most challenging circumstances. Their experiences demonstrate the value of working collectively, and prove that meaningful change must begin from the community.”
— Graça Machel, child rights and social justice advocate, co-founder of The Elders

“Kennedy Odede’s remarkable story of survival, from a glue-huffing street kid to a humble hero to the poor, is sure to inspire the next generation of activists and leaders. Remember his name.”
— Bryan Mealer, co-author of The Boy Who Harnessed the Wind

“Kennedy and Jessica and the work of Shining Hope for Communities bear testimony to the legacy of my mother, Nobel Peace Prize Winner Wangari Maathai. Jessica and Kennedy are creating a community of hummingbirds that will create the Kenya, and world, my mother envisioned.”
— Wanjira Mathai, Chair Greenbelt Movement

“Find Me Unafraid is a resounding tale calling for hope in a world that needs it desperately. With guts and determination, [Kennedy and Jessica] have forged a path that the world must follow. This is a rare story, filled with passion and the pursuit of justice and peace.”
— Leymah Gbowee, Nobel Peace Prize Winner