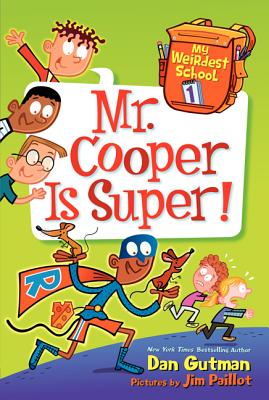 This is book number 1 in the My Weirdest School series.

With more than 30 million books sold, My Weird School really gets kids reading!

In the very first book in the laugh-out-loud My Weirdest School series, A.J.'s third-grade teacher at Ella Mentry School, Mr. Granite, is retiring after a million hundred years. It turns out the new teacher, Mr. Cooper, is even weirder than Mr. Granite! One day he's Rat Man and he teaches about rodents. The next day he's Lava Man and he teaches about volcanoes. But what happens when the school is threatened by a supervillain and a real superhero is needed? Will Mr. Cooper protect the school from evil, or just embarrass it to death?

Perfect for reluctant readers and word lovers alike, Dan Gutman's hugely popular My Weird School series has something for everyone. Don’t miss any of the hilarious adventures of A.J. and the gang—from Weird, to Weirder, to Weirder-est!

Jim Paillot lives in Arizona (another weird place) with his weird wife and two weird children. Isn’t that weird? You can visit him on his weird website at www.jimpaillot.com