House of Earth: A Novel (Paperback) 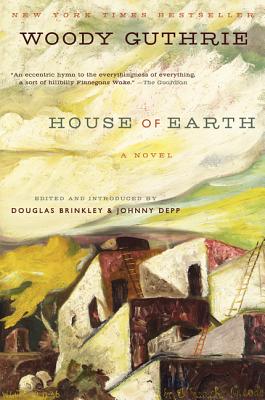 House of Earth: A Novel (Paperback)

Finished in 1947 and lost to readers until now, House of Earth is legendary folk singer and American icon Woody Guthrie’s only finished novel. A powerful portrait of Dust Bowl America, it’s the story of an ordinary couple’s dreams of a better life and their search for love and meaning in a corrupt world.

Tike and Ella May Hamlin are struggling to plant roots in the arid land of the Texas panhandle. The husband and wife live in a precarious wooden farm shack, but Tike yearns for a sturdy house that will protect them from the treacherous elements. Thanks to a five-cent government pamphlet, Tike has the know-how to build a simple adobe dwelling, a structure made from the land itself—fireproof, windproof, Dust Bowl-proof. A house of earth.

“Powerful…Happily, many good things happened, and the book is finally with us.” — Larry McMurtry, New York Review of Books

“Its voice is powerful, and to read it is to find kinship with an era whose angers and credulities still seem timely…There is a surprising electricity in House of Earth.” — USA Today

“The style of House of Earth is strange and lyrical…House of Earth becomes an invaluable addition to the literature of the Dust Bowl and the Great Depression, one with an eerie relevance in today’s America.” — Dallas Morning News

“Guthrie demonstrates an easy facility with language and the words of the people of the Great Plains. The opening lines strike a note of simple poetry…House of Earth will certainly be essential reading for Woody Guthrie fans.” — Christian Science Monitor

“House of Earth is an artifact, of course, but so is any buried treasure…House of Earth is well constructed, like a good song or house should be, but it’s also a bit flawed and unruly, exactly the way American literature has always been.” — Minneapolis Star Tribune

“What a combo! Johnny Depp and Woody Guthrie…This belongs on a shelf alongside Steinbeck’s The Grapes of Wrath,…” — New York Post

“House of Earth is so alive it is hard to realize that its author has been gone for 45 years….Stark, original, brutal in spots, lyrical in others, often very funny.” — Times (London)

“A heartfelt story about grinding poverty …This novel, more than a curiosity, is both welcome and timely.” — Daily Telegraph (London)

“The book is an eccentric hymn to the everythingness of everything, a sort of hillbilly Finnegans Wake…it offers intimate, often startling access to the peculiar intellect and capacious soul of a 20th-century icon.” — Guardian

“With Guthrie’s ear for language and eye for human passions, House of Earth is an engaging and poetic story about struggle that still rings true today. Its revival is welcome.” — Independent on Sunday

“Guthrie’s straight forward depiction of his raw rural characters are reminiscent of not any of his fellow Americans so much as they are of Mikhail Sholokhov. The folksy, incantatory exuberance is all Guthrie…An entertainment -- and an achievement even more than a curiosity, yet another facet of Guthrie’s multiplex talents.” — Kirkus Reviews

“Almost more a prose poem than a novel, this is an impassioned tirade against agribusiness and capitalism. Like Guthrie’s songs, the novel presents concerns of the Everyman…readers who appreciate Jon Steinbeck and Erskine Caldwell, as well as fans of Guthrie’s music, will want to reach for this folksy novel.” — Library Journal

“With dialogue riche in ‘hillbilly’ vernacular and a story steeped in folk traditions, Guthrie’s drought-burdened, dust-blown landscape swirls with life…His heritage as folksinger, artist, and observer of West Texas strife lives on through these distinct pages infused with the author’s wit, personality, and dedication to Americana.” — Publishers Weekly

“Told in the unmistakable vernacular of Woody, at once earthy and erudite, House of Earth is less a novel than an extended prose poem interrupted by healthy smatterings of folksy dialogue.” — Shelf Awareness