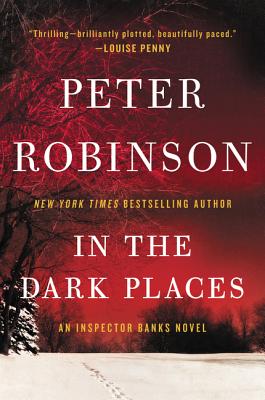 By Peter Robinson
Please email or write store for pricing and availability information.
Special Request - May Not Be Available

One of the world’s greatest suspense writers returns with this sensational new novel featuring Inspector Alan Banks, hailed by Michael Connelly as “a man for all seasons.”

It’s a double mystery: Two young men have vanished, and the investigation leads to two troubling clues in two different locations—a scorched van and a peculiar bloodstain in an abandoned airport hangar.

As Banks and his team scramble for answers, the inquiry takes an even darker turn when a truck careens off an icy road in a freak hailstorm. In the wreckage, rescuers find the driver, who was killed on impact, as well as another body—a body that was dead well before the crash.

Snow falls. The body count rises. And Banks, perceptive and curious as ever, feels himself being drawn deeper into a web of crime, and at its center something—or someone—dark and dangerous lying in wait.

One of the world’s most popular and acclaimed writers, Peter Robinson is the best-selling, award-winning author of the DCI Banks series; he has also written two short-story collections and three stand-alone novels, which combined have sold more than ten million copies around the world. Among his many honors and prizes are the Edgar Award, the CWA (UK) Dagger in the Library Award, and the Swedish Crime Writers’ Academy Martin Beck Award.

Praise for Peter Robinson’s In the Dark Places: “Peter Robinson is an author with amazing empathy, a snare trap ear for dialogue and a clear eye for the telling detail.”
— Michael Connelly, #1 New York Times-bestselling author of The Burning Room

“Peter Robinson is a master, and In the Dark Places shows why. Thrilling, sophisticated, and emotionally involving, this is edge-of-your-seat, heart-in-your-throat suspense. A must-read.”
— Tess Gerritsen, New York Times bestselling author of Die Again

“Brilliantly plotted, beautifully paced, it gathers speed and dread until I could barely stand it. Peter Robinson writes with compassion, with depth, with the assurance of a writer at the top of his game.”
— Louise Penny, #1 New York Times-bestselling author of The Long Way Home and How the Light Gets In