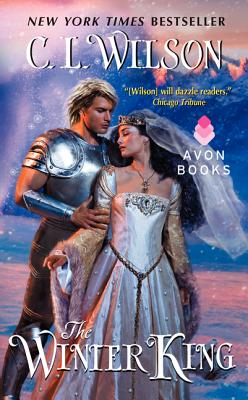 After three long years of war, starkly handsome Wynter Atrialan will have his vengeance on Summerlea's king by taking one of the man's beautiful, beloved daughters as his bride. But though peace is finally at hand, Wynter's battle with the Ice Heart, the dread power he embraced to avenge his brother's death, rages on.

Khamsin Coruscate, Princess of Summerlea and summoner of Storms, has spent her life exiled to the shadows of her father's palace. Reviled by her father, marriage to Wintercraig's icy king was supposed to be a terrible punishment, but instead offers Kham her first taste of freedom—and her first taste of overwhelming passion.

As fierce, indomitable Wynter weathers even Khamsin's wildest storms, surprising her with a tenderness she never expected, Kham wants more than Wynter's passion—she yearns for his love. But the power of the Ice Heart is growing, dangerous forces are gathering, and a devastating betrayal puts Khamsin and Wynter to the ultimate test.

C. L. Wilson wrote her first story at age six, and though she took a number of long detours during her life, she never gave up her lifelong dream of being published. Many years, hundreds of false starts, and five completed novels later, she received "The Call" in October 2006 and sold her epic fantasy romance, Tairen Soul, at auction. Her debut novel spent two weeks on the USA Today bestseller list, and her subsequent novels have gone on to hit a variety of lists, including USA Today, New York Times, and Publishers Weekly. When not writing, C. L. enjoys relaxing with her husband and three children in sunny Florida and daydreaming of a world where people exercise in their sleep and chocolate chip cookie dough ice cream is a fat-burning food.

Wilson pulls out all the stops in her long-awaited return to epic romantic fantasy, with plenty of steamy sensuality and riveting action...Bursting with subtle political intrigue and vivid details, the beautifully constructed world comes to life, offering a glimpse into the emotional landscape of two rather broken individuals. — Publishers Weekly