Made for You (Hardcover) 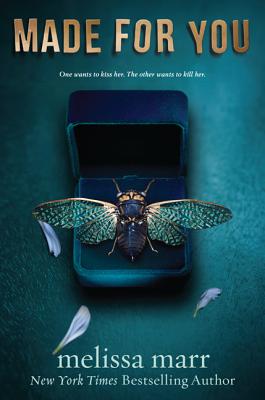 By Melissa Marr
Please email or write store for pricing and availability information.
Special Request - May Not Be Available

Eva Tilling wakes up in the hospital to discover she possesses a strange new skill—the ability to foresee people's deaths when they touch her. While she is recovering from her hit-and-run accident, Nate, an old flame, reappears, and the two must traverse their rocky past as they figure out how to use Eva's power to keep their friends—and each other—from falling into the hands of a killer.

This contemporary romantic suspense novel from five-time New York Times bestselling author Melissa Marr earned widespread critical acclaim, with Kirkus Reviews calling it a "riveting whodunit that delivers a bouquet of teen romance, paranormal, and thriller." And BCCB declared, "Between the suspense, the horror, the romance, and the wit, this will have equal appeal for fans of Sarah Dessen and Rosemary Clement-Moore."

Melissa Marr is the New York Times bestselling author of the Wicked Lovely series as well as the adult fantasy novels Graveminder and The Arrivals. When not traveling, Melissa can be found in Phoenix or online at www.melissamarrbooks.com.

“Genuinely chill-inducing... between the suspense, the horror, the romance, and the wit, this will have equal appeal for fans of Sarah Dessen and Rosemary Clement-Moore.”
— Bulletin of the Center for Children’s Books

“A smart, sassy thriller! Melissa Marr shows off her killer instincts in this sensational tale of a southern debutante’s scary ability to foresee death, and the man who’d like to end it, permanently.”
— Lisa Gardner, #1 New York Times bestselling crime novelist

“Seductively creepy, disturbingly realistic, and intensely suspenseful. This sinister tale of twisted teenage love and obsession will pull you in from the first page—and haunt you long after you close the last one.”
— Hank Phillippi Ryan, winner of the Mary Higgins Clark, Agatha, and Anthony awards