The Impossible State: North Korea, Past and Future (Hardcover) 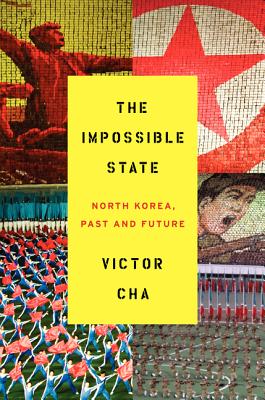 By Victor Cha
Please email or write store for pricing and availability information.
Special Request - May Not Be Available

The definitive account of North Korea, its veiled past and uncertain future, from the former Director for Asian Affairs at the National Security Council

In The Impossible State, seasoned international-policy expert and lauded scholar Victor Cha pulls back the curtain on this controversial and isolated country, providing the best look yet at North Korea's history, the rise of the Kim family dynasty, and the obsessive personality cult that empowers them. He illuminates the repressive regime's complex economy and culture, its appalling record of human-rights abuses, and its belligerent relationship with the United States, and analyzes the regime's major security issues—from the seemingly endless war with its southern neighbor to its frightening nuclear ambitions—all in light of the destabilizing effects of Kim Jong-il's recent death.

How this enigmatic nation-state—one that regularly violates its own citizens' inalienable rights and has suffered famine, global economic sanctions, a collapsed economy, and near total isolation from the rest of the world—has continued to survive has long been a question that preoccupies the West. Cha reveals a land of contradictions, one facing a pivotal and disquieting transition of power from tyrannical father to inexperienced son, and delves into the ideology that leads an oppressed, starving populace to cling so fiercely to its failed leadership.

With rare personal anecdotes from the author's time in Pyongyang and his tenure as an adviser in the White House, this engagingly written, authoritative, and highly accessible history offers much-needed answers to the most pressing questions about North Korea and ultimately warns of a regime that might be closer to its end than many might think—a political collapse for which America and its allies may be woefully unprepared.

Victor Cha served in the White House as Director for Asian Affairs at the National Security Council from 2004 to 2007. He currently holds the D. S. Song-KF Chair in Government and Asian Studies at Georgetown University and is a senior adviser at the Center for Strategic and International Studies in Washington, D.C.

“An up-close, insightful portrait. . . . The Impossible State is a clearheaded, bold examination of North Korea and its future.”
— Washington Post

“Cha demonstrates an intimate familiarity with the regime’s contradictions. . . . The thesis is clear: the world’s most closed-off state needs to open up to survive, but breaking its hermetic seal may well precipitate its demise.”
— The New Yorker

“A meaty, fast-paced portrait of North Korean society, economy, politics, and foreign policy by an expert who has studied the regime as a scholar and interacted with its officials.”
— Foreign Affairs