Witness to America: A Documentary History of the United States from the Revolution to Today (Hardcover) 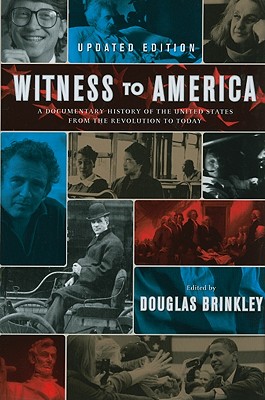 By Douglas Brinkley
Please email or write store for pricing and availability information.
Special Request - May Not Be Available

In this newly updated edition, Douglas Brinkley, one of our most distinguished historians, brings together a stunning collection of eyewitness accounts that chronicles the American experience from the perspectives of those who participated in its making.

Witness to America includes nearly 150 works drawn from America's history, from the first shots of the Revolutionary War to the twenty-first century. From Patrick Henry's rousing "Give Me Liberty or Give Me Death!" speech to John Brown's stand at Harpers Ferry; from Franklin D. Roosevelt's promise of a New Deal to Neil Armstrong's account of walking on the moon; from 9/11 and Hurricane Katrina to Barack Obama's landmark speech on race: this sweeping volume brings the milestones in American history vividly to life.

Here are unique and revealing selections from such historical figures as John Adams, Walt Whitman, Mark Twain, Dwight D. Eisenhower, and John F. Kennedy, as well as influential individuals, among them Booker T. Washington, Charles Lindbergh, Ernie Pyle, Rosa Parks, and Betty Friedan. While many of the selections come from notable citizens, most are from ordinary Americans—schoolteachers, students, homemakers, pioneers, and soldiers—who describe the everyday events that have epitomized American life over the course of its history, indelibly demonstrating both the variety and vitality of the American character.

Witness to America sweeps across the vast territory that is our nation, illuminating the movements, ideas, inventions, and events that have shaped and defined us—from the Pony Express to the personal computer; from the frontier to the rise of suburbia; from farming to modernization and the information age. Within these pages discover the art of whaling, learn about survival on the Gold Rush trail, experience the glory and trauma of war, and glean new insight on the great leaders. Here are debates and speeches, diary entries, letters, memoirs, court records, and more—including many first-person accounts that make history come alive as never before, such as a powerful description of the atomic explosion from a correspondent on the Enola Gay and a young student's evaluation of the changing roles of women at her high school.

Witness to America is a fascinating, highly readable, and entertaining collection that shows us what America is and where it may go.

“Lest we imagine that the United States dropped full blown from the sky, here are the eyewitness accounts of those who were present at the creation. It reads like discovering a nation’s diary.”
-Joseph E. Persico, coauthor of My American Journey with Colin L. Powell

“The selection of first person narratives is superb, the connective passages are clear and convincing, and the overall effect is to transport the reader on an fascinating journey through American life.”
-Doris Kearns Goodwin, Pulitzer Prize winning author of No Ordinary Time

“These firsthand narratives and commentaries stretching from the Boston Tea Party to the Millennium are compelling—the gold dust of history.”
-Harold Evans, The American Century

“This continues a strong vivid thread in what Dr. Martin Luther King called ‘America’s Garment of Destiny’. It should be required reading for every citizen.”
-Frank Keegan, Senior Editor, Express Times

“This is living history, wonderfully readable.”
-Donald L. Miller, author of City of the Century

“If you came from a distant planet and could have only one book to tell you what America is all about, you could not do better than this.”
-Michael R. Beschloss, author of Taking Charge

“Witness to America is a rich and rewarding journey through the history of the United States. . . . I’ll pick it up again and again.”
-Tom Brokaw

“Witness to America reads as if it were today’s news about unforgettable chapters of our history, told by those who lived it and those who observed it. Personal and perceptive, the book brings to life pivotal moments of drama, intrigue, challenge and triumph.”
-Steven Spielberg

“For both scholars and lay readers who like American history, this work will be an invaluable resource.”
-Booklist