Desires of the Dead: A Body Finder Novel (Hardcover) 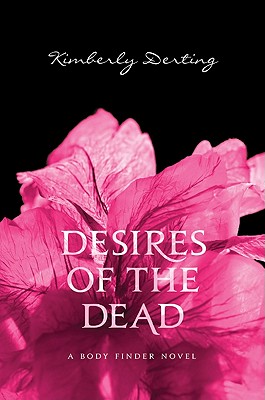 By Kimberly Derting
Please email or write store for pricing and availability information.
Hard to Find

Violet and Jay are finally dating, but adjusting to the new relationship is not as easy as Violet anticipated. Especially when she has to split Jay’s time and attention with his new best friend, Mike, and Mike’s pesky younger sister—who happens to be obsessed with Jay.

Meanwhile, when Violet’s special abilities lead her to the body of a young boy, her tip to the police puts her on the radar of the FBI. Violet tries to fend off the FBI’s questions while maintaining the semblance of a normal life, but somebody’s leaving her threatening notes and an echo around Mike’s house reinforces that all is not right. Violet is forced to admit that perhaps the only people who can help her figure it out are the very people she’s desperate to avoid—the FBI.

Desires of the Dead is the compulsive second book in the four-book Body Finder series by Kimberly Derting.

Kimberly Derting is the author of the Cece Loves Science series, the Body Finder series, the Pledge trilogy, and the Taking series. She lives in the Pacific Northwest, where the gloomy weather is ideal for writing anything dark and creepy. Her three beautiful (and often mouthy) children serve as an endless source of inspiration and frequently find things they say buried in the pages of their mother’s books. You can visit her online at www.kimberlyderting.com.

Praise for The Body Finder: “The romance and the mystery in The Body Finder were so intense that I didn’t know whether to hold my breath or scream. I did know I wouldn’t be getting anything done until I read the whole book.”
— Melissa Marr, New York Times bestselling author of Wicked Lovely

“You’ll be drawn in by the love story—and kept up all night by the suspense.”
— Claudia Gray, New York Times bestselling author of the Evernight series about The Body Finder

“First–time novelist Derting has written a suspenseful mystery and sensual love story that will captivate readers who enjoy authentic high–school settings, snappy dialogue, sweet romance, and heart–stopping drama. A real page–turner, this will have readers checking behind themselves and refusing to go anywhere alone.”
— Booklist about The Body Finder