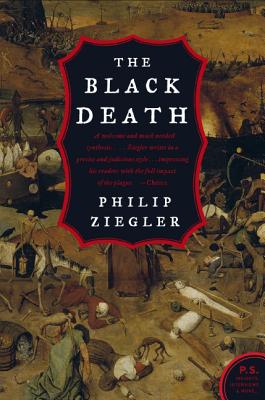 “As exciting and readable an account as you could wish.”  — The Guardian

The Black Death vividly and comprehensively brings to light the full horror of this uniquely catastrophic event that hastened the disintegration of an age.

A series of natural disasters in the Orient during the fourteenth century brought about the most devastating period of death and destruction in European history. The epidemic killed one-third of Europe's people over a period of three years, and the resulting social and economic upheaval was on a scale unparalleled in all of recorded history. Synthesizing the records of contemporary chroniclers and the work of later historians, Philip Ziegler offers a critically acclaimed overview of this crucial epoch in a single masterly volume.

Philip Ziegler was educated at Eton and New College, Oxford. A former member of the diplomatic service, he has written biographies of King William IV, Lord Melbourne, Lady Diana Cooper, Lord Mountbatten, King Edward VIII, Harold Wilson, and Osbert Sitwell. His most recent book is Legacy: Cecil Rhodes, the Rhodes Trust and Rhodes Scholarships. He is at work on the official biography of Prime Minister Edward Heath. Mr. Ziegler lives with his wife in Kensington, London.

“Fascinating. . . . There’s nothing like reading about people being entombed to put your own problems in perspective.” — Bill Bryson

“As exciting and readable an account as you could wish.” — The Guardian

“The clarity and restraint on every page produce a most potent cumulative effect.” — Michael Foot, Evening Standard

“A welcome and much needed synthesis. . . . Ziegler writes in a precise and judicious style…illuminating his readers with the full impact of the plague.” — Choice