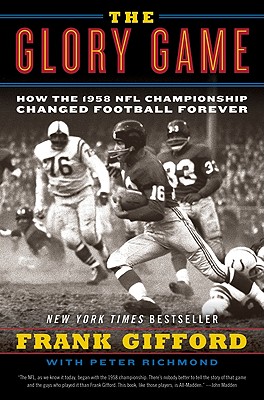 By Frank Gifford, Peter Richmond
Email or call for price. Handling fee may apply.
Available to Order - Usually Arrives in Our Store in 4 to 7 Days

“Frank Gifford brings the contest so alive that you find yourself almost wondering, 50 years later, how it will turn out in the end.”
—New York Times Book Review

The Glory Game recreates in breathtaking detail the 1958 National Football League Championship Game between the New York Giants and the Baltimore Colts, which many football fans feel was “The Greatest Game Ever Played.” This first-hand, field level, “behind-the-helmet” account by ex-Giant Hall of Famer and longtime “Monday Night Football” broadcaster Frank Gifford brings back to life all the sights and sounds of the momentous contest that changed football forever, and offers vivid, indelible portraits of the legendary players—including Sam Huff, Andy Robustelli, Art Donovan, Lenny Moore, and Raymond Berry. The Giants-Colts clash of ’58 was truly The Glory Game—and now readers can relive it in all its glory.

A New York Giant for twelve seasons, Frank Gifford received the NFL's Most Valuable Player Award in 1956 and was inducted into the Pro Football Hall of Fame in 1977. He was a sports broadcaster for more than thirty years—including twenty-seven years in the booth for ABC's Monday Night Football. He lives in Greenwich, Connecticut, with his wife, Kathie Lee Gifford, and their children.

Peter Richmond is the author of four other books, including The Glory Game (with Frank Gifford). His writing has appeared in The New Yorker, Vanity Fair, Rolling Stone, the New York Times Magazine, and GQ. He lives with his wife in Dutchess County, New York.

“The NFL, as we know it today, began with the 1958 Championship. There’s nobody better to tell the story of that game and the guys who played it than Frank Gifford. This book, like those players, is All-Madden.”
— John Madden

“Frank Gifford’s superb memoir shows what it really takes and means to be a champion. Also, it’s nice to read about the Giants losing a title game.”
— Bill Belichick