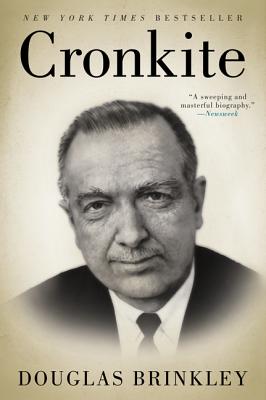 An acclaimed author and historian, Brinkley has drawn upon recently disclosed letters, diaries, and other artifacts at the recently opened Cronkite Archive to bring detail and depth to this deeply personal portrait.

“A majestic biography. . . . Cronkite is evidence that a job can be done just about perfectly. That goes for the man and this exceptional biography.” — The New York Times Book Review

“With the style and precision worthy of his subject, Douglas Brinkley’s biography of the late Walter Cronkite gives the icon his due. . . . A keen, fair-minded book.” — The San Francisco Chronicle

“Walter Cronkite exemplified the glorious age of trusted journalism. In this deeply researched and brilliantly analytic biography, Douglas Brinkley captures his essence. He treats Cronkite as not just an icon, but as a real human with passions, loves, and occasional enmities. It’s a fascinating and valuable tale.” — Walter Isaacson

“Douglas Brinkley’s absorbing and well-researched book recaptures the high solstice of American television journalism and the man who most exemplified that moment. It also illuminates, behind the scenes, a Walter Cronkite that millions of Americans thought they knew, but, as Brinkley’s book now shows us, didn’t.” — Michael Beschloss

“Exhaustively researched and beautifully written, Cronkite is a classic. Douglas Brinkley has written his best book yet. This is a fascinating story that will be read for years to come.” — Debby Applegate

“In this absorbing and sensitively-written biography, Douglas Brinkley has captured not only the life and momentous decades of a uniquely American legend, but also the heartbeat of a nation in its times of both triumph and tragedy.” — Ronald Steel

“This sweeping narrative of Walter Cronkite’s life is irresistibly told, beautifully written, and deeply researched. Douglas Brinkley has produced one trustworthy biography after another, each one commanding widespread respect and admiration. And this is one of the very best.” — Doris Kearns Goodwin

“The personal and professional life of Walter Cronkite is an American treasure - and we should all be grateful to Douglas Brinkley for telling it so well.” — Tom Brokaw

“A sweeping and masterful biography.” — Newsweek

“A superb biography. . . . If only we had Walter Cronkite today.” — Tina Brown, Newsweek

“Cronkite’s career has vast scope, and cumulative effect of this book is illuminating, not only about the man himself but also about the way he filtered history for a nation.” — Janet Maslin, The New York Times

“An ambitious and deeply researched biography. . . . Cronkite magically transports the reader to a bygone era. . . . Recounted here in detail, with scholarly grasp and smooth narrative flow, are the familiar milestones and more obscure regions of Cronkite’s life.” — The Boston Globe

“Informed, wide-ranging, clear, accessible. . . . This richly detailed and impeccably researched biography brings you into a vivid life,. . . . A thorough, even-handed and illuminating work that goes beyond image and myth about the broadcast legend for a full, frank and fascinating portrait.” — Newsday

“A tremendous read. . . . Brinkley’s book brings this man intimately to light, in all his petty maneuvers and all his grandeur. I gobbled up every page.” — Robert MacNeil, The Washington Post