If Today Be Sweet: A Novel (Paperback) 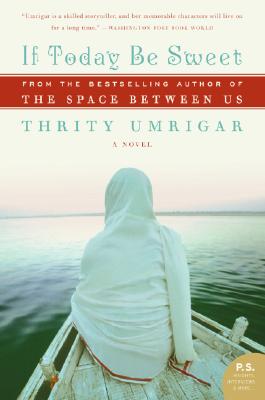 If Today Be Sweet: A Novel (Paperback)

“Ultimately, [If Today Be Sweet] reflects on what makes an individual part of a community, and movingly depicts the heartaches, responsibilities, and rewards of family life—among one’s own blood relatives as well as one’s ‘family of choice.’ . . . [A] meditation on the complex process of building a new life.” — Charlotte Observer

The recent death of her beloved husband, Rustom, has taken its toll on Tehmina Sethna. Now, while visiting her son, Sorab, in his suburban Ohio home, she is being asked to choose between continuing her old life in India and starting a new one in this unfamiliar country with her son, his American wife, and their child. Her destiny is uncertain, and soon the plight of two troubled young children next door will force the most difficult decision she has ever faced. Ultimately the journey is one that Tehmina must travel alone.

Eloquently written, evocative, and unforgettable, If Today Be Sweet is a poignant look at issues of immigration, identity, family life, and hope.

Thrity Umrigar is the author of seven novels Everybody’s Son, The Story Hour, The World We Found, The Weight of Heaven, The Space Between Us, If Today Be Sweet, and Bombay Time; a memoir, First Darling of the Morning; and a children’s picture book, When I Carried You in My Belly. A former journalist, she was awarded a Nieman Fellowship to Harvard and was a finalist for the PEN Beyond Margins Award. A professor of English at Case Western Reserve University, she lives in Cleveland, Ohio.

“Both the opportunities—and costs—of forging a new life in America are thoughtfully explored. Ultimately, the novel reflects on what makes an individual part of a community, and movingly depicts the heartaches, responsibilities, and rewards of family life—among one’s own blood relatives as well as one’s ‘family of choice.’ . . . [A] meditation on the complex process of building a new life.” — Charlotte Observer

“Umrigar has undertaken to show us the cultural divide between Indian and American cultures . . . She makes an interesting point, one she’s mentioned in other works: We make up our own families wherever we are; we choose our circumstances; we are capable of being heroes anywhere.” — Washington Post

“[A] poignant story . . . What might have been just another story about widowhood is, in Umrigar’s hands, a canvas on which love, death, family, pain, and personal transformation are subtly painted. Readers see through Tammy’s eyes as she struggles to understand her new role in life and the new definition of family. This novel transcends culture and will appeal to a wide variety of readers.” — Library Journal (Starred Review)

“Umrigar renders a sublime, cross-cultural tale about lives driven by tradition and transformed by love.” — Booklist

“A tender portrait of a Bombay widow and her Americanized son, and the culture clash that ensues. . . . Umrigar’s intimate portrayal of a mother and son divided by culture is a convincing testament to the enduring power of place.” — Kirkus Reviews

“[A] tender fourth novel . . . Umrigar shows the unseemly side of American excess and prejudice while gently reminding readers of opportunities sometimes taken for granted.” — Publishers Weekly

“[A] lyrical novel about a very special woman whom anyone should be proud to call a friend. . . . A refreshing story about an Indian woman of the Parsis or Zoroastrian faith. For believers, there is restorative power in fire and light and her actions speak of her fiery zeal to right wrongs and the illumination she provides others simply by her existence. Hers is an ancient culture—one that existed long before the United States and its promises of equality to all individuals.” — Decatur Daily

“Tehmina is an appealing character . . . Her attempt to make a new life for herself after the death of her much-loved husband is moving, and her sense of displacement from her home—even while she feels the pull of family and a fresh start—is believable.” — Columbus Dispatch

“A convincing testament to the enduring power of place.” — Kirkus Reviews