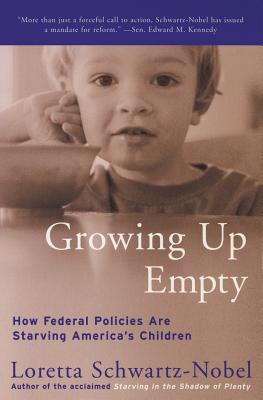 Growing Up Empty is a study of the hidden hunger epidemic that still remains largely unacknowledged at the highest political levels and "an unforgettable exploration of public policy, its failures and its victims" (William Raspberry, Washington Post).

Among the people we come to know are the new homeless. Born of the "Welfare to Work" program, these working poor have jobs but do not make enough to support their families, such as the formerly middle-class housewife reduced to stealing in order to feed her children, or the soldier fighting on our front lines while his young wife stands in bread lines and is denied benefits and baby formula at a military health clinic.

With skillful investigative reporting and a novelist's humanitarian eye for detail, Schwartz-Nobel portrays a haunting reality of human suffering that need not exist. A call to action, Growing Up Empty is advocacy journalism at its best.

Loretta Schwartz-Nobel has won the Women in Communications Award, the Society of Professional Journalists Award, the Penny Missouri Award, the coveted Columbia Graduate School of Journalism Award, and has twice won the Robert F. Kennedy Memorial Award for outstanding coverage of the problems of the disadvantaged. She lives in Philadelphia, Pennsylvania.

“A penetrating journalistic study that puts a human face on [hunger]. ... A wake-up call to policy makers.”
— Kenneth Kusmer, author of Down and Out, On the Road: The Homeless in American History