The Secret Life of Plants: A Fascinating Account of the Physical, Emotional, and Spiritual Relations Between Plants and Man (Paperback) 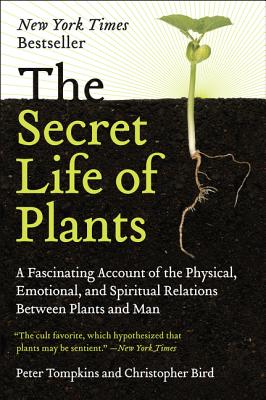 The Secret Life of Plants: A Fascinating Account of the Physical, Emotional, and Spiritual Relations Between Plants and Man (Paperback)

Explore the inner world of plants and its fascinating relation to mankind, as uncovered by the latest discoveries of science. A perennial bestseller.

In this truly revolutionary and beloved work, drawn from remarkable research, Peter Tompkins and Christopher Bird cast light on the rich psychic universe of plants. Now available in a new edition, The Secret Life of Plants explores plants' response to human care and nurturing, their ability to communicate with man, plants' surprising reaction to music, their lie-detection abilities, their creative powers, and much more. Tompkins and Bird's classic book affirms the depth of humanity's relationship with nature and adds special urgency to the cause of protecting the environment that nourishes us.

Peter Tompkins was an American journalist, World War II spy, and best-selling author. His best known and most influential books include The Secret Life of Plants, published in 1973, Secrets of the Great Pyramid, reprinted in paperback in 1997, and Mysteries of the Mexican Pyramids, published in 1976. He is the father of author Ptolemy Tompkins.

Christopher Bird was a writer best known for his books The Secret Life of Plants and The Divining Hand: The 500-Year-Old Mystery of Dowsing. He served in the Central Intelligence Agency in the 1950s. Fluent in French and Russian, Mr. Bird was an editor of the Gallatin Annual of International Business and a correspondent for Time Magazine in Yugoslavia.

“The cult favorite, which hypothesized that plants may be sentient. . . . Fantastic revelations!” — New York Times

“Once in a while you find a book that stuns you. This is such a book. It’s scope leaves you breathless.” — San Francisco Chronicle

“This fascinating book... roams over that marvelous no man’s land of mystical glimmerings into the nature of science and life itself.” — Washington Post