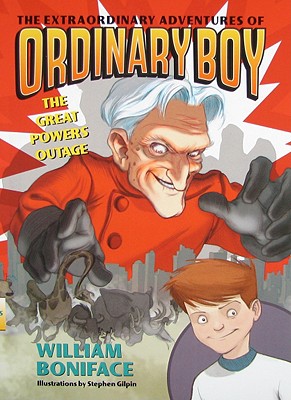 There's something strange going on in Superopolis! The entire population has turned its back on its favorite potato chips of all time. Everyone has switched to the Amazing Indestructo's Amazing Pseudo-Chips. And all because someone named Comrade Crunch told them to.

The weird thing is, no one has ever heard of Comrade Crunch. Who is he, and how is he getting the supercitizens to follow his every command?

That's not the only mystery in town. The superheroes of Superopolis are losing their superpowers! Without their special gifts, they're just . . . ordinary! Luckily, there's one person in town who understands ordinary.

In a city where everyone is—well, was— extraordinary, this might just be a job for ordinary boy!

William Boniface may or may not exist. Ordinary Boy, after all, tells his own story. Mr. Boniface could simply be a creation of the publisher in order to fulfill the requirement that an author be listed on the cover of this book. Given that possibility, there is no harm in revealing that Mr. Boniface has lent his name to over two dozen far less wordy children's books that were also in need of an author. Unless, of course, he didn't, which would make this entire biography irrelevant.

Stephen Gilpin is the award-winning illustrator of dozens of children's books and has worked for tons of awesome clients. He lives and works with his wife, Angie, in Hiawatha, Kansas.